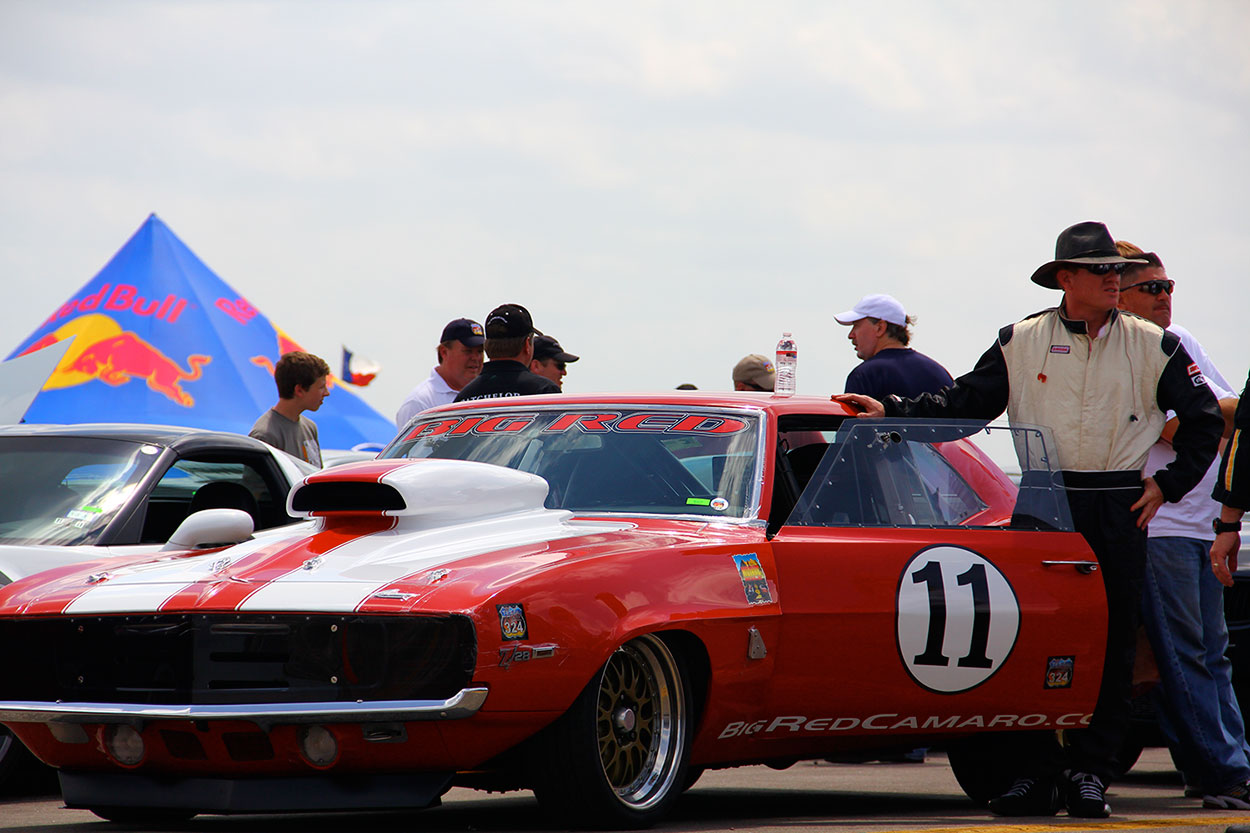 Originally built for Dan Gottlieb and his son RJ in the fall of 1987 by Bill Osborne
of Inland Chassis Design-Rialto, CA, Big Red was born with its Stock Car
inspired frame tucked into the all steel ’69 Camaro body. RJ and Osborne
unleashed the newly completed car at the 1988 La Carrera where it won, handily
defeating all the Porsche Turbos and Ferraris. Big Red was later banned from
the event earning it the nickname “Outlaw Racer.” The following year RJ again
piloted Big Red to victory over all the European Exotics at the Silver State
Classic, and set a record that still stands – averaging 199 MPH on a 90-mile
stretch of Nevada highway. Hot Rod Magazines Joe Pettitt rode shotgun and
wrote an unforgettable account of what it was like to ride along at 220+ MPH on
the undulating and gently curving highway in this classic American Muscle
Car. From the beginning Dan, RJ and Team have sought to push Big Red to the
very limit of what is possible with the 1969 Camaro platform. In the past 30 years
Big Red has collected an assortment of records and conquests over a broad
spectrum of motorsports disciplines, and every year, they look to tackle more
new and extraordinary challenges.

30 years after the car was built, NOW, it’s finally here! The long awaited and
much anticipated Big Red Build Book! This Team Killeen Build Book has been in
the making since the 2015 Pre-Pikes Peak teardown of Big Red and takes you
deep inside the Worlds Fastest and Most Famous ’69 Camaro. With a whopping
294 pages documenting the teardown and rebuild of Big Red as the Team
modernized the car and prepared it for running Pikes Peak. Then through the
devastating fire during track testing that followed, the book takes you through a
second rebuild. This double volume Build Book gives the reader deep insights
and closely guarded secrets into the car in not one, not two, but ALL THREE of
the Big Red setups: Road Race/Hill climb mode, Bonneville Land Speed setup
and Ultimate Pavement Top Speed configuration. With hundreds of photographs
and technical insight from the Team that built and maintains the legendary car
there is nothing this book doesn’t reveal. Authored by Tony Huntimer and
published by automotive journalist Scott Killeen, this is a must have for every
Pro-Touring Muscle Car fanatic.

Available at bigredcamaro.com/shop and Amazon – FREE SHIPPING when you
order direct from the Big Red Camaro webstore and use Promo Code:
LATG2020