By far one of the biggest performance improvements people make to their car is suspension. Especially if they are working on a classic car, the suspension from 50 years ago is archaic and doesn’t meet any sort of modern day performance. Even back then the geometry was bad and it was more about going in a straight line or just cruising along.

No doubt there’s many different manufactures out there with tons of great options for your ride. But they all generally fall into two different categories: Bolt-On or Complete Frames. You can take off the factory suspension and in a day bolt on new suspension and have a night and day difference – so do you need to swap out the complete frame?

Which one is best? Let’s discuss a few talking points about both. 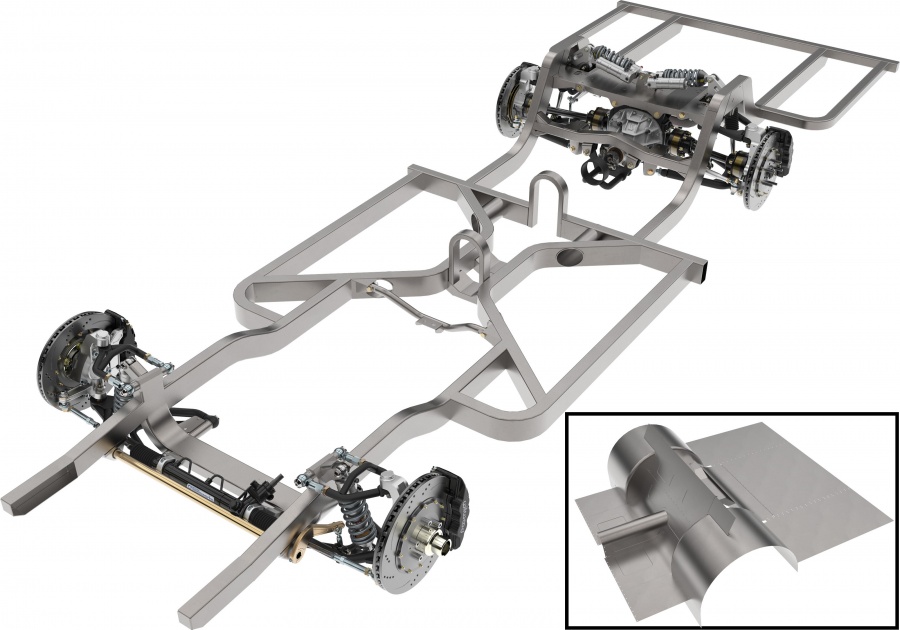 By far the easiest way to upgrade suspension is to bolt in new suspension! It’s easy to do and can make a drastic difference plus the frame is already under the car. With the amount of technology and knowledge gained over the years these suspension companies make huge leaps and bounds over the stock suspension.

One man told us years ago “The frame is just a fixture for the suspension to pivot from. So why change it out? Save money and just bolt on new suspension.” That thought always stuck with us and made complete sense to us. The issue with this though is that these companies have pre-determined pick up points they have to work with. Maybe the suspension would work 10% better if the arm was 1″ lower. They can’t do that because the frame is already outfitted with pick up points from the factory.

The other big point is that if you look at the cost of a complete frame set up compared to a nice bolt on suspension, it’s vastly cheaper to go with a bolt-on suspension set up – at least at first glance. 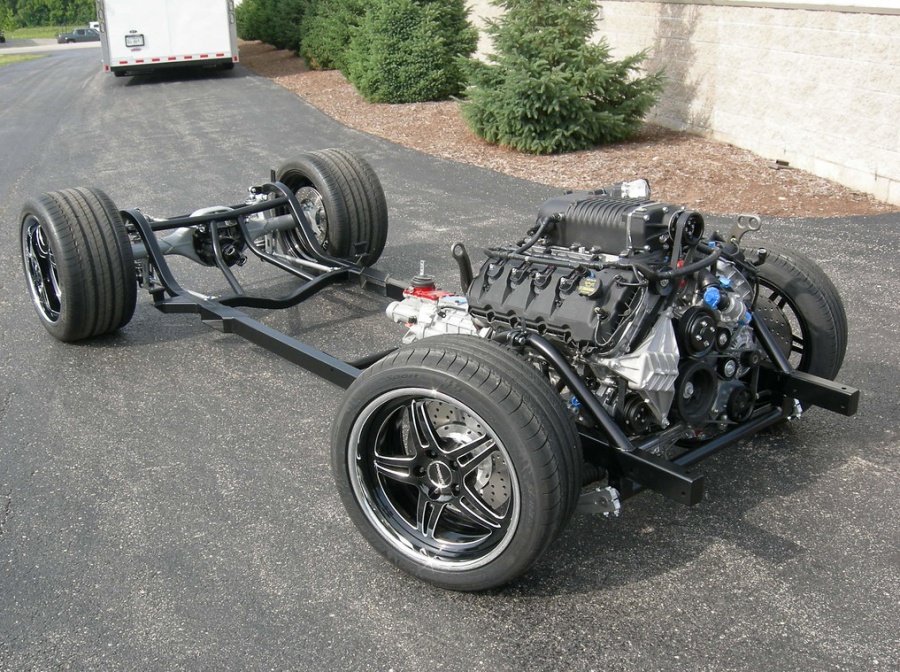 “Not to downplay the benefits of a well-designed and manufactured bolt-on suspension system, but there are inherent limitations when working with a stock chassis and floor pan. Space or lack of available space is the most obvious issue. Wider and taller tires, bigger motors, power adders, larger exhaust, modern transmissions, advance suspension configurations.  None of these are things that engineers plan for when designing a vehicle for mass production,” explained Lino Chestang of Chris Alston Chassisworks. 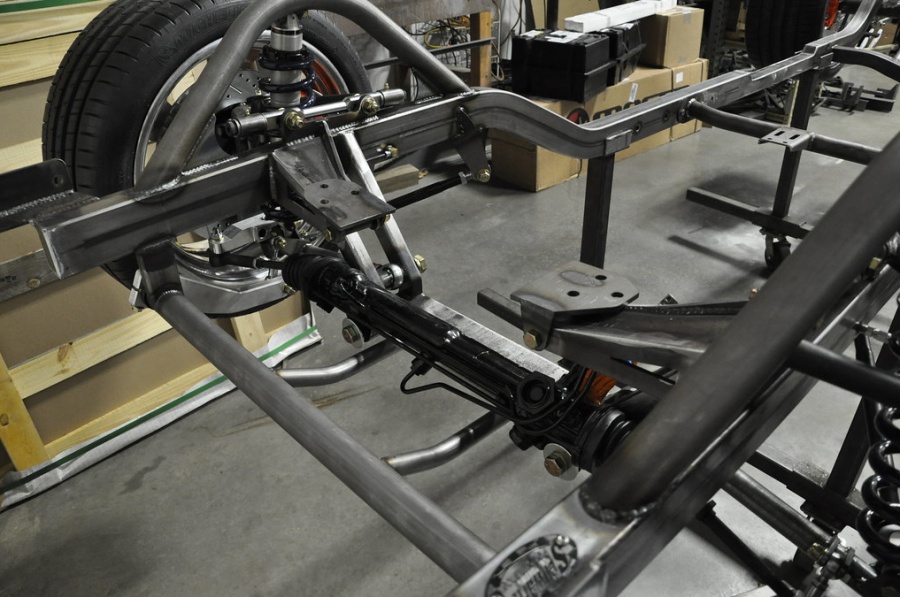 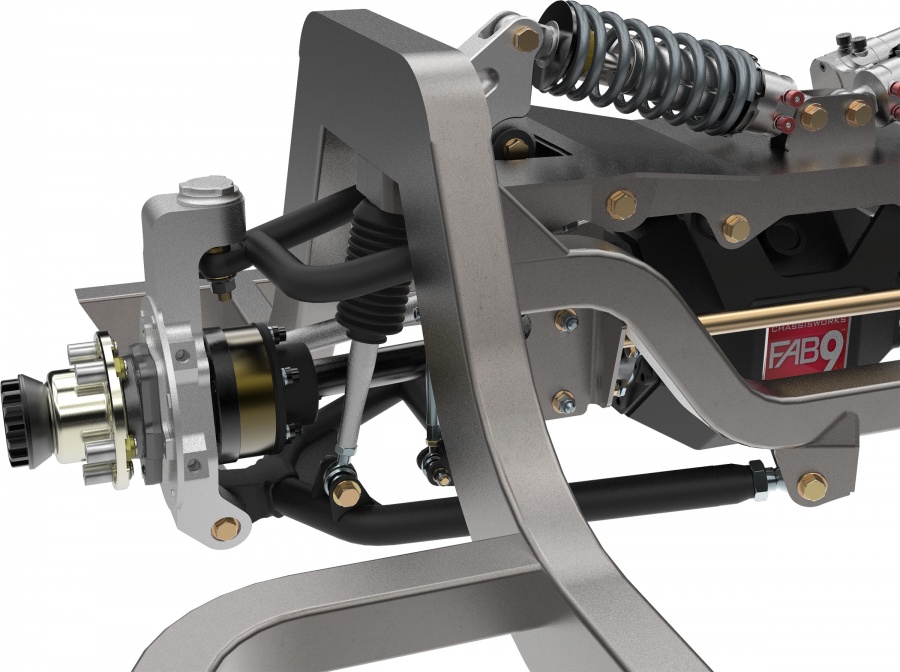 Probably the hardest pill to swallow with a full frame set up is the cost. A top-of-the-line bolt on suspension set up with shocks, springs, sway bars, arms and everything can be around $5,000-6,000. A complete frame set up is going to run you double that easily.

However the $5-6K isn’t the entire story. More than likely you’ll have to strip and paint or powder coat the frame. Before you do that most people are modifying the frames to accept larger wheels, then reinforcing the frame which adds additional costs. On top of that you have to re-plumb the entire frame as well. When you start adding all this up, that original price can go up pretty fast.

Another consideration is the labor aspect. If you’re building a stock frame yourself you can save some money by building it yourself but those are a lot of hours being used up. If you’re paying somebody to build it, then that’s a lot of money as well. 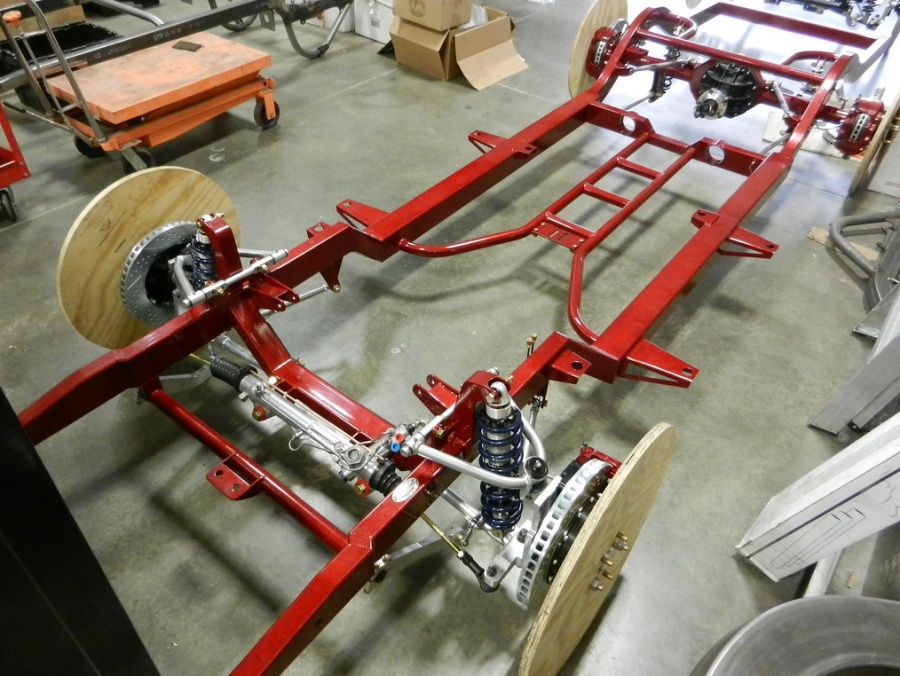 Strength is another big point. If you plan on doing any sort of serious racing, a factory frame isn’t up to par. If you’re sticking with bolt on suspension and want to get serious about racing, you’re going to be doing frame stiffening upgrades. That could be fairly easy bolt on stiffening components or welding in stiffeners.

“Often overlooked is structural integrity. Even working with a complete reproduction body or more recent chassis platform, the levels of torque combined with increased traction commonly found in nearly any style of modern build fatigue, weaken and eventually damage the chassis. You simply cannot run tons of horsepower through a stock chassis on regular basis without tearing torque boxes and suspension mounts, or twisting the unibody or stock frame,” explained Lino. 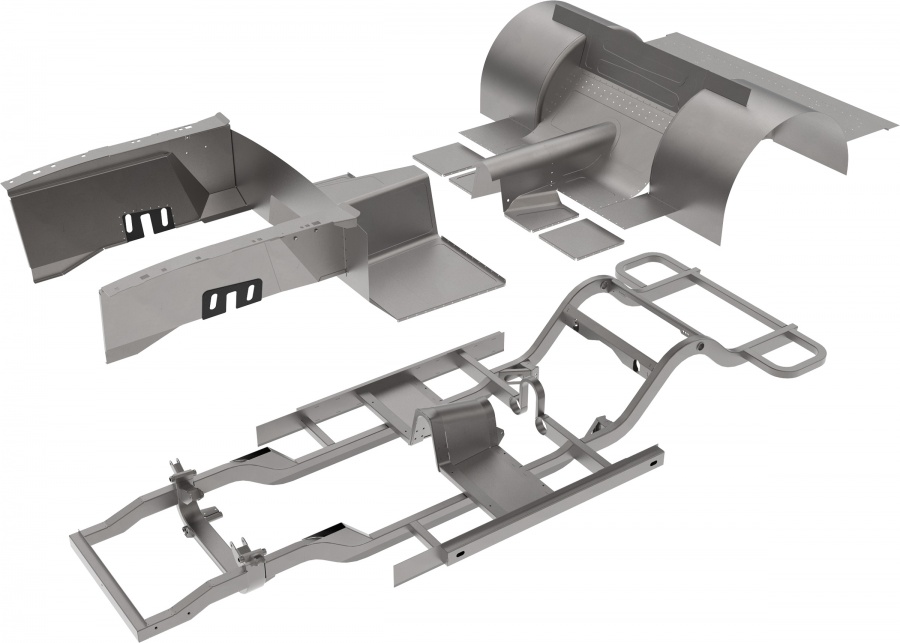 Since they are starting from scratch, a new frame manufacturer is able to look at the weaknesses of a stock frame and improve on that. Right off the bat there are better used materials such as square tubing instead of open C-channels or a complete frame on uni-body cars.

“Generally speaking, a Schwartz chassis is about 125 pounds lighter than a stock chassis,” stated Schwartz. When you’re racing for tenths of a second, that weight reduction can add up. People spend thousands to drop 20 or 30 pounds for fiberglass parts so over a 100 pound drop is pretty significant. 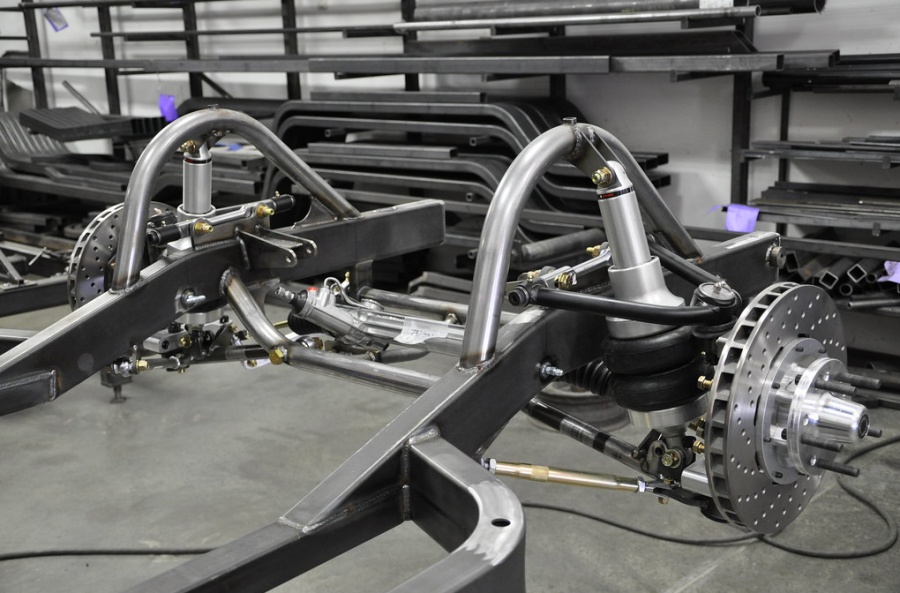 Going back to the issue of not being able to move pick up points on factory frames, an aftermarket frame is a completely blank slate. “We are able to find the best geometry for that application. This includes not only camber and caster characteristics, but things like being able to put very large wheels on that suspension as well,” stated Schwartz.

There’s no doubt that suspension technology is constantly improving. A 1966 Mustang suspension is nothing compared to a 2016 Mustang. As manufactures have learned more, so has the aftermarket. A complete new frame is sort of like putting a ’16 Mustang under the body of that ’66 Mustang. All those improvements are able to be implemented. Bolt-On suspension is doing the same thing, but has the struggle of working within the factory styles and pick up points. 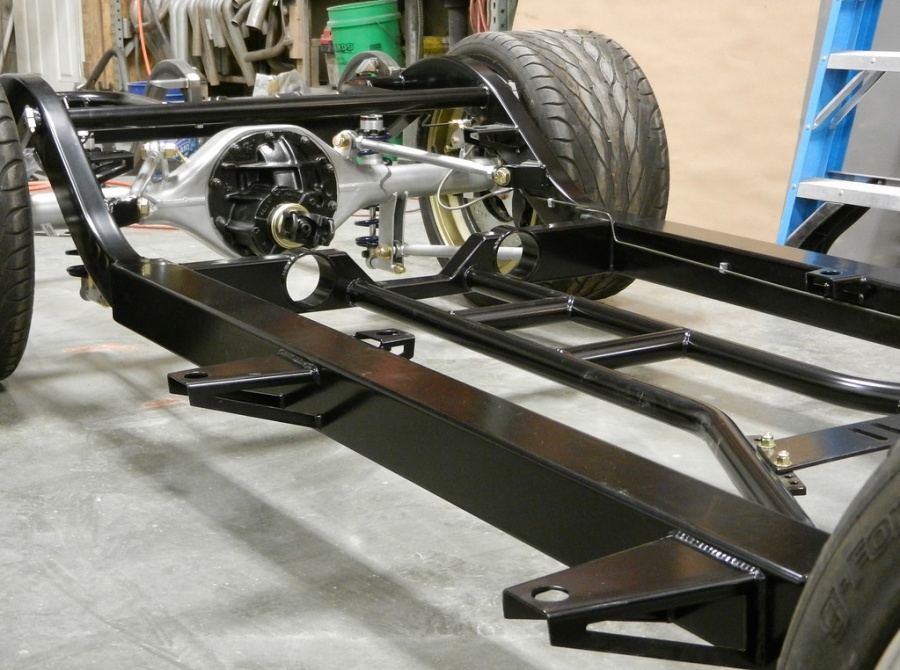 Another geometry change that an aftermarket frame incorporates is with the frame rails. When you’re trying to stuff a 345 series tire in the back, in most applications you’re having to notch the factory frame to be able to accept such a large tire. With an aftermarket frame, that’s already done and ready to go minus your factory fender wells.

“An aftermarket chassis is not just about suspension. A new, non-C-clipped rear axle is included, or in our case a full floater; A better posi unit (truetrac in ours);  big brake package and other components,” explained Dale Schwartz. 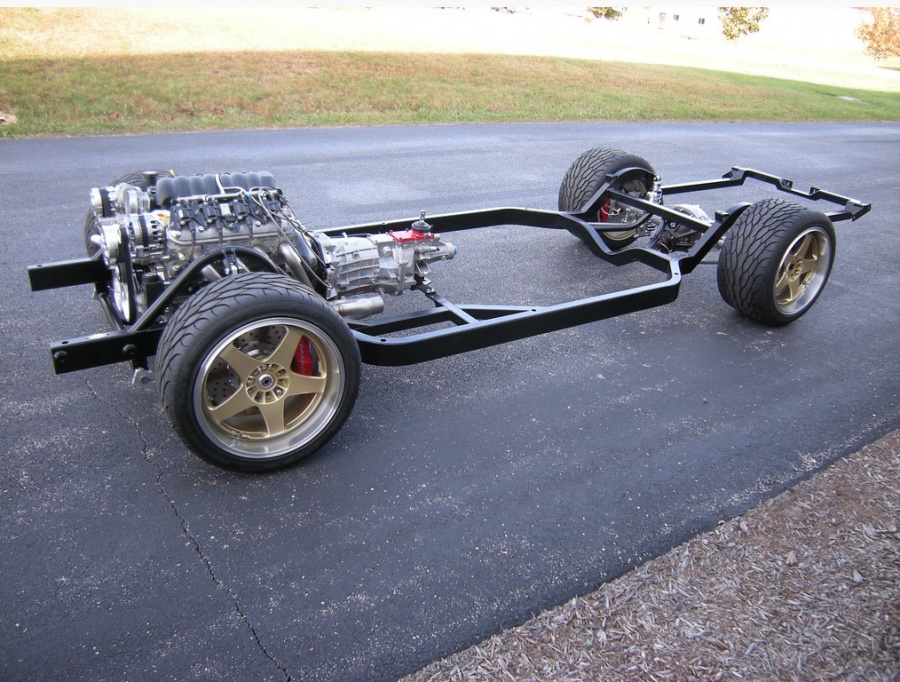 “A complete chassis isn’t for everyone, there are some other things to consider when looking at complete chassis,” stated Schwartz. We asked Dale what he means by that and he explained it for us.

When you purchase a complete aftermarket chassis, you are being forced to use certain components. For example, you’re going to be buying high-end headers that are designed for your engine and that specific chassis. The days of buying $200 headers for a ’69 Camaro with a SBC are gone. These all come with large big brakes such as a 13″ Baer brakes set up, so the days of cheap 15″ wheels are gone as well.

The positive to this commitment is less stress of things not working together. With Schwartz and Chris Alston everything is designed to work together. That means they have built with the components time and time again and know exactly what works from the suspension, brakes and even components like engine and transmission mounts. The other positive is if you have an issue, you can call one place – not 10 different manufacturers. 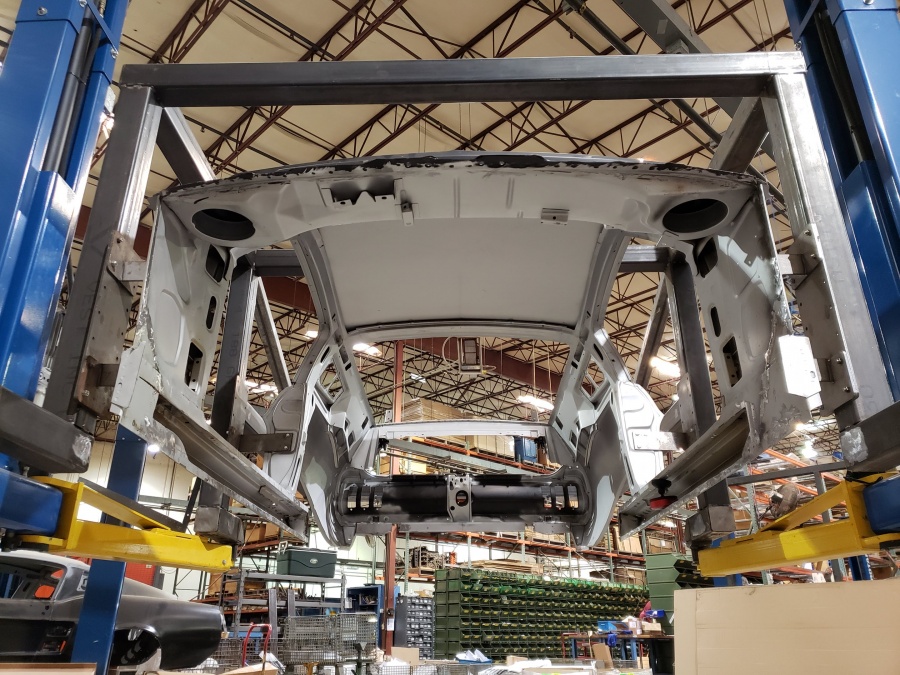 When we were talking to both Schwartz Performance and Chris Alston Chassisworks we noticed they have two different trains of thought for putting in a frame. Both are right but we felt that depending on what you’re wanting in your car could effect your decision.

Lino explained the train of thought behind Chris Alston’s Chassisworks chassis. “Chris Alston’s Chassisworks has a long history in drag racing and with that comes a different approach to a replacement chassis. For decades drag racers have been cutting away the frames and floors in the pursuit of speed and greater reliability. By taking this approach, Chassisworks was free to design a frame and floor structure suitable for four-figure horsepower builds and the largest street tires currently in production. Without restriction of the stock rear floor, multiple styles of suspension can be used, including canted 4-link, torque arm with Watts link, IRS and parallel 4-link or ladder bar if you’re wanting to go pro street.” 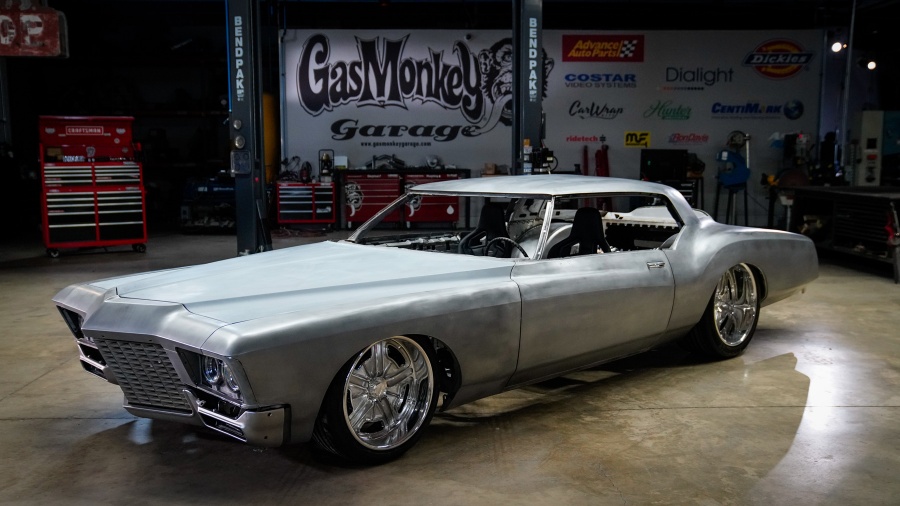 For Chris Alston’s complete chassis set ups, they require you cut the entire floor out of the car. His thinking is that by time you make transmission hump modifications, driveshaft tunnel modifications and rust repair, you’re over halfway to a completely new floor. So instead of trying to put a completely new suspension under a car and make it work with the factory floor, they just remove all the stock floor and put in new. This made a lot of sense to us, but definitely not everybody’s cup of tea either.

Let’s not forget that looks are a big part of the equation as well. The aftermarket chassis’ will be precise cut and welds that look like a stack of dimes. A 50 year old frame didn’t have the fitment a modern one does. The factory welds while strong, are less than desire-able in the looks department.

At the end of the day the best suspension choice is going to purely depend on you. Your budget, time frame, skill level, and goals will all be determining factors in your choice. There’s pro’s and con’s for going with either set up. There’s no right or wrong or better option here as that’s purely going to you and your car.