The Future Of Hot Rodding

One big question in the automotive industry is how to sustain and continue the growth. The reoccurring theme there seems to be “how do we get kids engaged?”

This question has been raised thousands of times, and has received a thousand different answers. Things like take away their cell phones and get them outside! Sure, that’s one way to do it. But with the way technology has intertwined itself with society, that’s just not going to happen. As a father of four young kids, I try to balance it all. They need to be comfortable with technology but at the same time I still think that there are lessons to be learned in the garage as well. 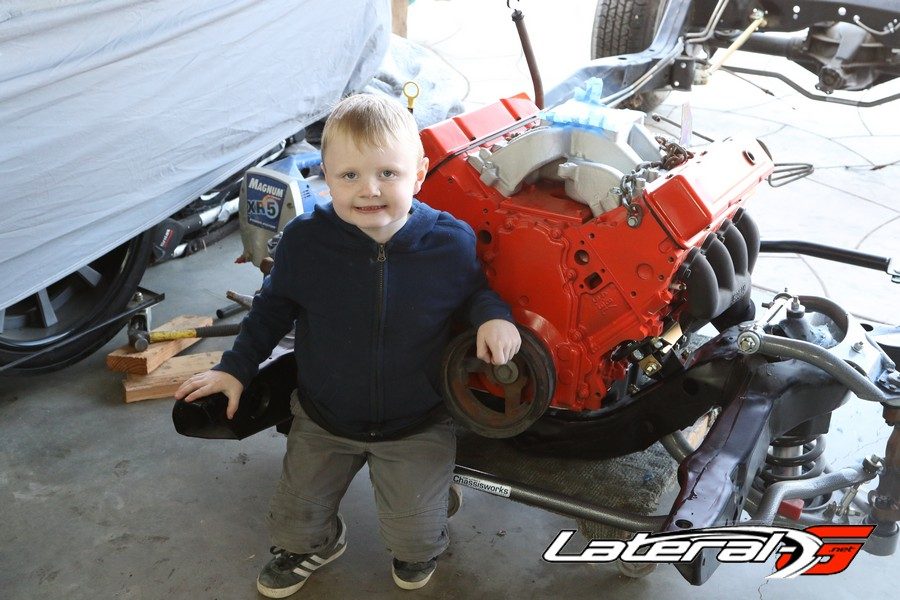 One of my helpers, my oldest boy Samuel.

I grew up with advancement of computers, but still wrenching in the garage. I love being able to fix things myself instead of forking over hundreds, if not thousands of dollars for repairs. Even with my passion for cars and my kids being around cars while growing up, is that really enough? Another answer was to get kids to the track – let them hear, see and smell engines running and racing. That kind of excitement is hard to beat. Does that solve the issue?

There’s no doubt that while the automotive industry is large, it’s not growing at the rate it used to. For anybody reading this article, you most likely couldn’t wait till the day you got your license. It was your ticket to freedom and almost a rite of passage into adulthood. Talking with a neighbor of mine, their friend is in their mid-20’s and still doesn’t have a license. This seems unfathomable to most of us, myself included.

In any situation I always have great empathy. I always look at things from the other side of the fence and understand it. This can lead to great dismay for myself as I have my beliefs that I feel are right, but I can understand where the other side is coming from. Recently I saw a SEMA member talking about the issue of engaging kids and how they were working hard on that. While a noble cause, I honestly don’t think he, or SEMA will get anywhere with that. Sure it sounds good on paper, but the truth of the matter it’s a pocket knife in a gun fight. SEMA’s very livelihood rides on this industry – why aren’t they doing more? To be frank these initiatives they have are like politicians going around kissing babies. About as useful as tits on a bull.

For me, the issue is a much bigger one. Now I don’t want to get too much into politics here, but it’s unavoidable when talking about this issue. Society now, whether you agree or not, is expensive. Generally speaking, most people in their 20’s are trying to finish school, find a job, maybe even buy a house. Student debt is no joke, and unfortunately the loans are the biggest when you’re the poorest. Sure we can talk about trade schools and such and whether college is the right choice, but let’s just judge a book by it’s cover and generalize a bit saying that a good majority of people in their 20’s and even 30’s are in some form of student debt.

Then they have the task of finding a job that’s going to pay for that debt. Generally speaking they will get an entry level job that’s not the best pay. At this point, they might be renting an apartment if they are lucky. For most, they live at home for awhile. Eventually they will likely save up enough to get their first house.If it sounds like I’m speaking from experience, you’re exactly right. 10 years ago, this was me. I was worried about paying bills and was slowly slipping into more and more debt.

The point of all this is that kids these days don’t have disposable income. There are always exception to that rule, but most don’t. They are struggling to afford one car, let alone a ‘hot rod’ as well. Plain and simple, if there’s no money to afford a car to modify, it’s not going to happen no matter how much interest there is. Food on the table and a roof over their heads will always take precedence over a hot rod.

I don’t think that there is a lack of interest in classic cars. Most kids like them to some degree. Sure they would love a hot rod to fix up, but they just don’t have the money to do that. Cars aren’t cheap. Even in a relatively “cheap” form of racing as Autocross, the cost can go up exponentially as you get more competitive.

The automotive industry this much greater challenge than just merely lack of interest. There’s no clear cut answer on how to solve this, as it’s a massive issue with a million different factors at play.

Let’s face the truth – this entire industry is run on disposable income. Nobody needs a ’69 Camaro or a Hellcat Hemi. This is just one big toy industry for gearheads that grew up. So when you don’t have the money to spend, you don’t spend it. How we fix this issue so the younger generation can afford cars is the million dollar question.

For now, we can still chip away by making sure these kids still love cars. At least when they finally do have the disposable income they will want to spend it on their ride. Or if you really want to help, give them a car or sell them your cars or parts cheap. Think of it as funding the future of the automotive hobby. Sort of like a drug dealer…that first hit is always free.