Borgeson Install: Why Grand Cherokee Steering Boxes Aren’t Worth It!

Recently we’ve been doing some upgrades on our Project No Name Chevelle. One thing we had to do was adjust the turn signal switch and clearance the column a tiny bit as it was catching the hub adapter. It was at that point we noticed the amount of slop in the gear box. Then it hit us, this is the same power steering box that’s been on the car for 20 years! 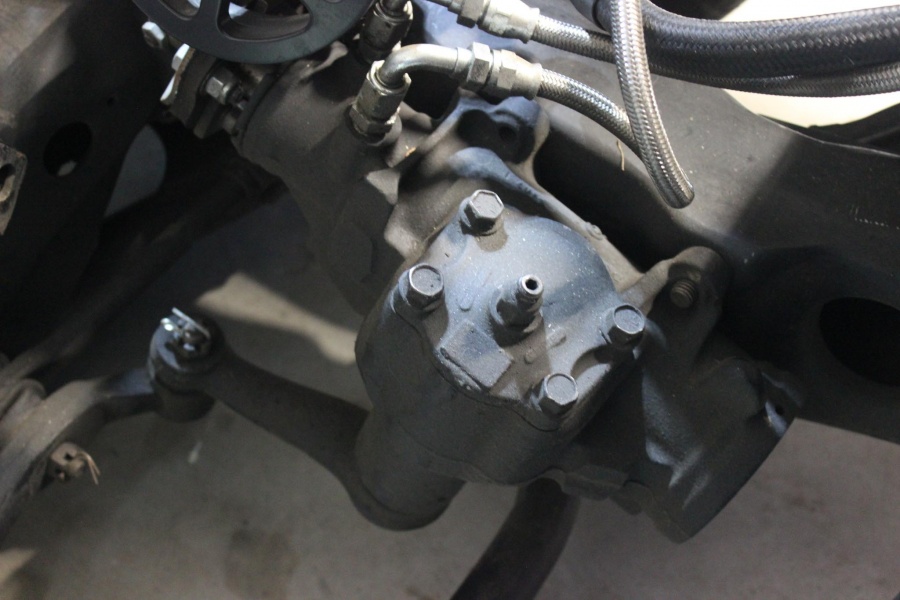 The box still worked and didn’t leak a drop but we really had no clue what the ratio was and it was starting to show it’s age. We started to research different boxes and saw that a Jeep Grand Cherokee box swap was a cheap and popular upgrade. Instead of scouring the web trying to figure it out, we gave Borgeson a ring and talked with Jeff Grantmeyer who knows way too much about steering boxes.

“The Grand Cherokee box is a popular swap, but there’s a few reasons why we don’t recommend doing that swap,” explained Jeff. The first is that those boxes have about a dozen different ratios, so you don’t really know if you’re buying a quick steering box or not until you get it home and count for yourself. One guy on a forum stated he drove to different auto parts stores about bought 10 boxes before finding a quick ratio version. Just the time consumption alone cancels out any savings for us. 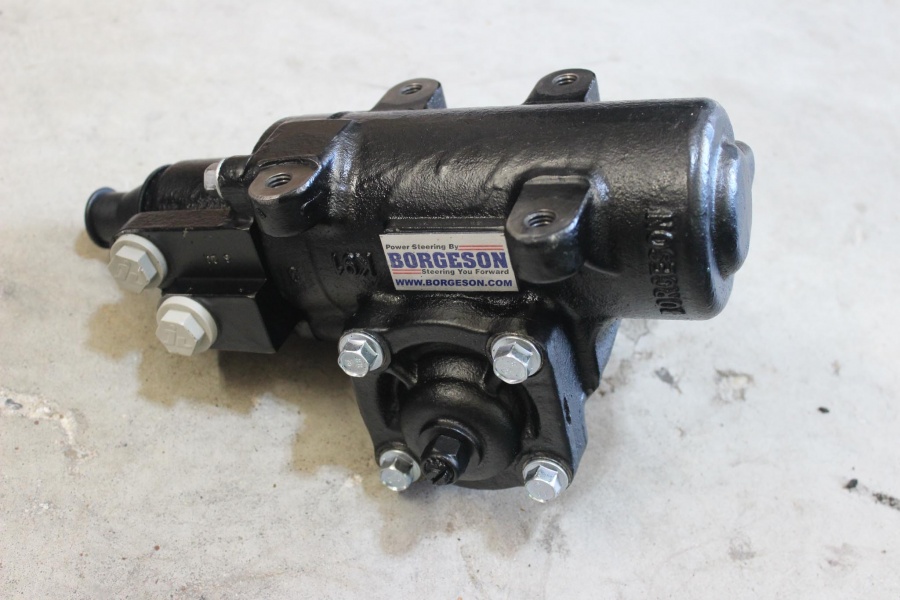 “The boxes with the #25 casting on them are variable ratio from 13-16:1 so you don’t get the feel of a fixed center 12:1 box,” stated Jeff. Another factor is the Jeep boxes often have built in steering stops that can drastically limit the steering radius on your car which is bad for parking or tight turning during autocross.

“Another issue is that they are all rebuilt boxes. You don’t know what you’re getting as far as the quality of parts nor the quality of the rebuild,” continued Jeff. Parts store rebuilders don’t always take the utmost care in rebuilding the boxes and there can be plenty of issues with that. 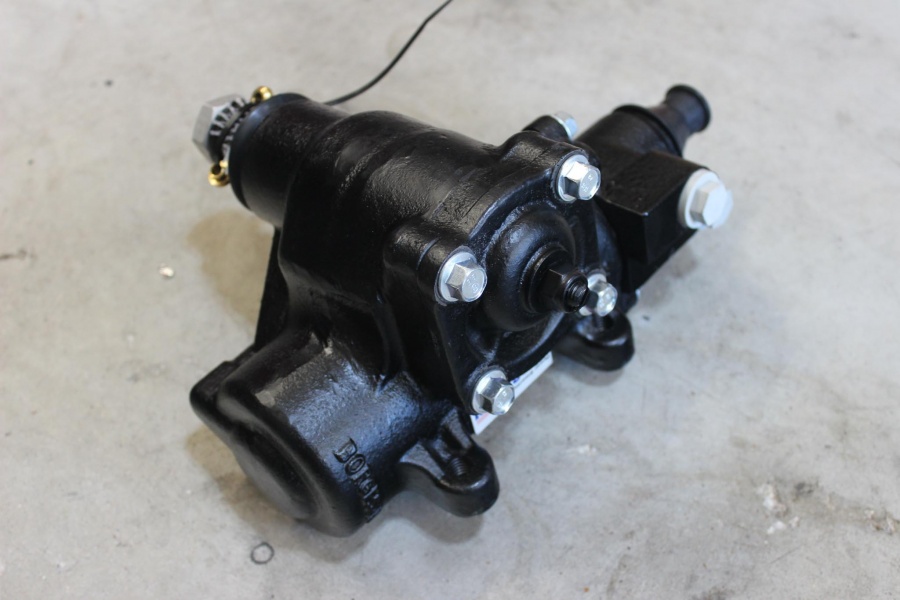 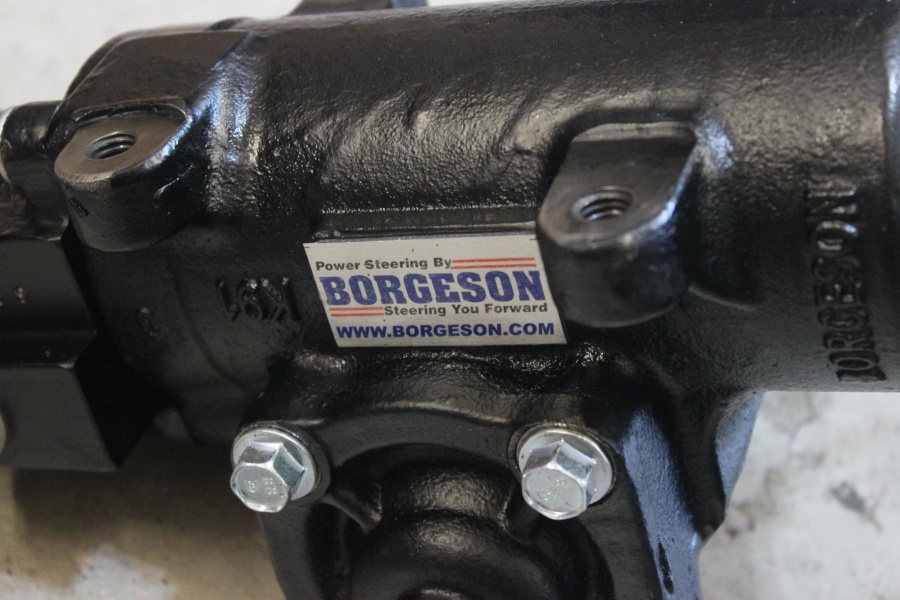 After hearing Jeff ramble on about all the possible issues with the Grand Cherokee box, we knew that wasn’t an option for us. We wanted a brand new, never been rebuilt box from Borgeson. “Our boxes are 100% brand new with no rebuilt, worn out parts in them. They are made to our precise specifications and feature a full 88 degrees of rotation so you won’t see any impact on turning radius. We use a modern valve that drastically improves steering feel as well,” explained Jeff. We were sold on it and told him to ship us a box – less than a week later it was sitting on our doorstep.

Installation of the box is pretty straight forward. We started by removing the old box first. We didn’t have a pitman arm puller so we did rent one at the local auto parts store for $20. Our first step in the process though was to disconnect the power steering lines and drain the fluid into a pan. 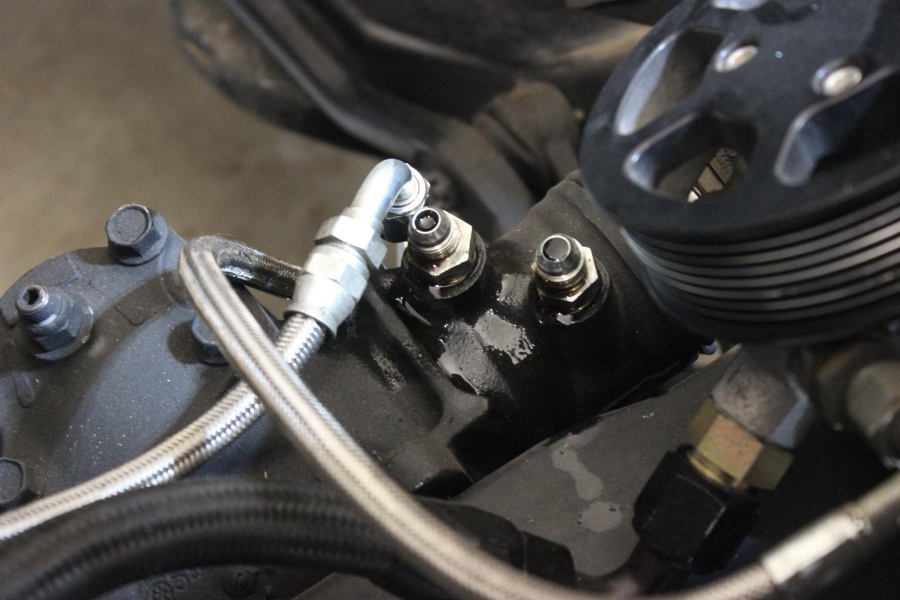 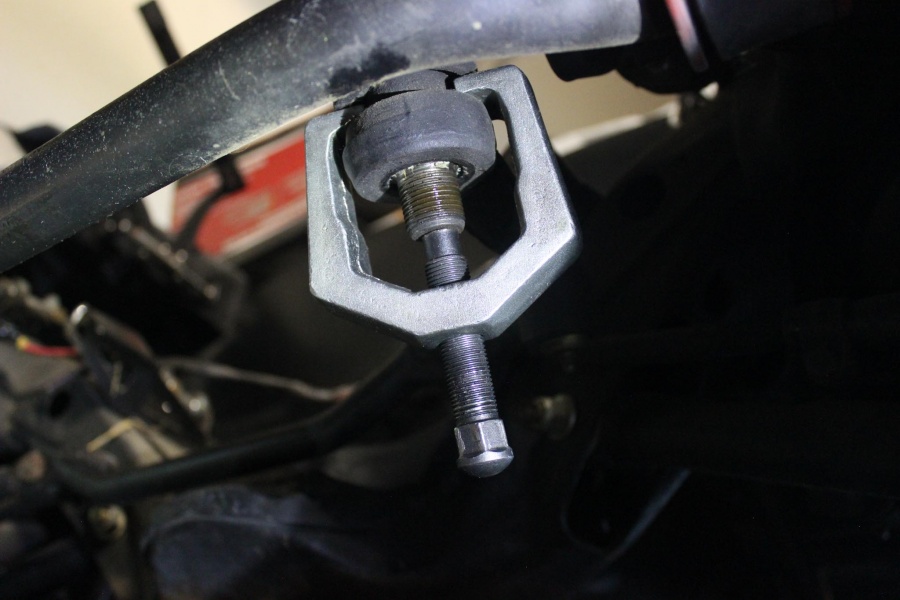 Then we crawled under the car and removed the big nut and popped off the pitman arm from the box. After removing the rag joint, we simply removed the three bolts holding the box to the frame and slide the whole box on out. 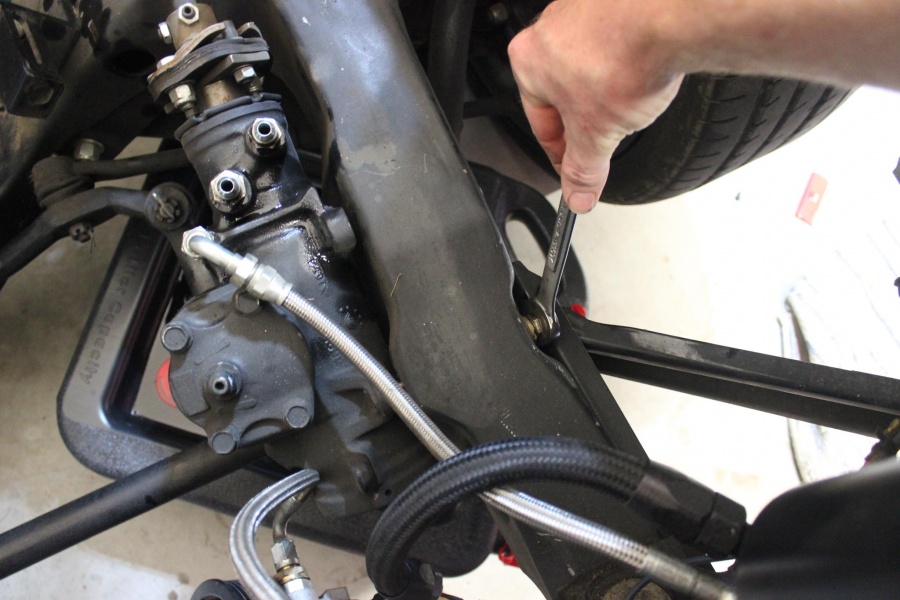 Comparing the two boxes side-by-side we see they are very similar in size and weight but the new Borgeson box was smaller in a few areas which might help those that have header or accessory clearance issues. 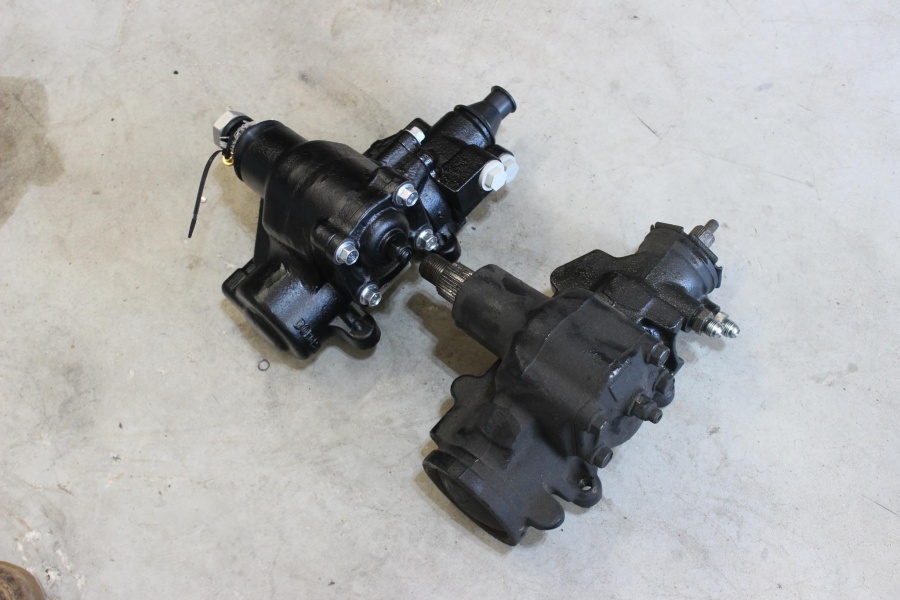 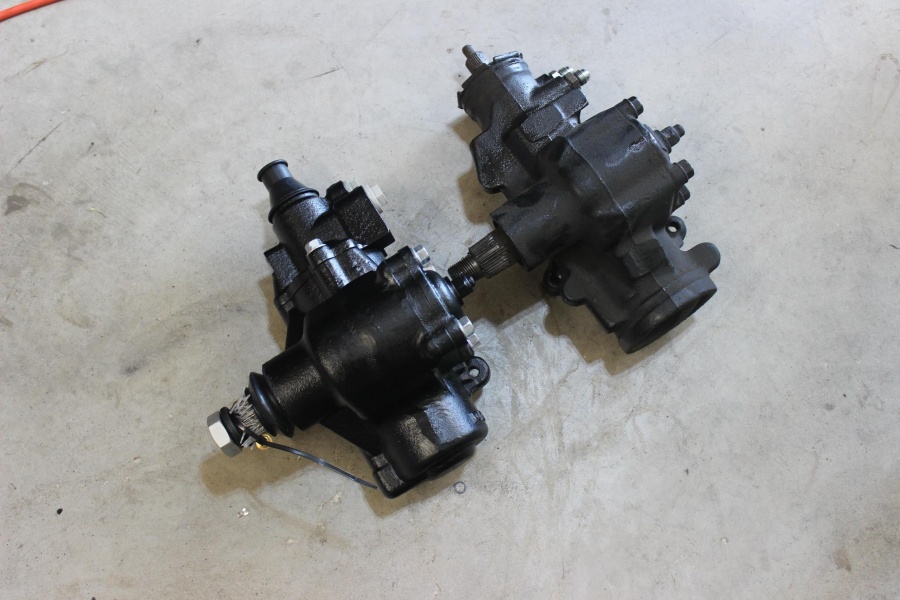 Installation was just as easy as the removal and we started by installing the new coupler for the rag joint that’s needed for this new box. Then we slid the new box into it’s home and bolted it up using the three bolts. From there we installed the pitman arm, tightened down the rag joint and attached the power steering lines. One quick note on the lines is they are set up to use an O-Ring style fitting but if you are using a flared fitting like us, Borgeson supplies brass inserts to adapt them. 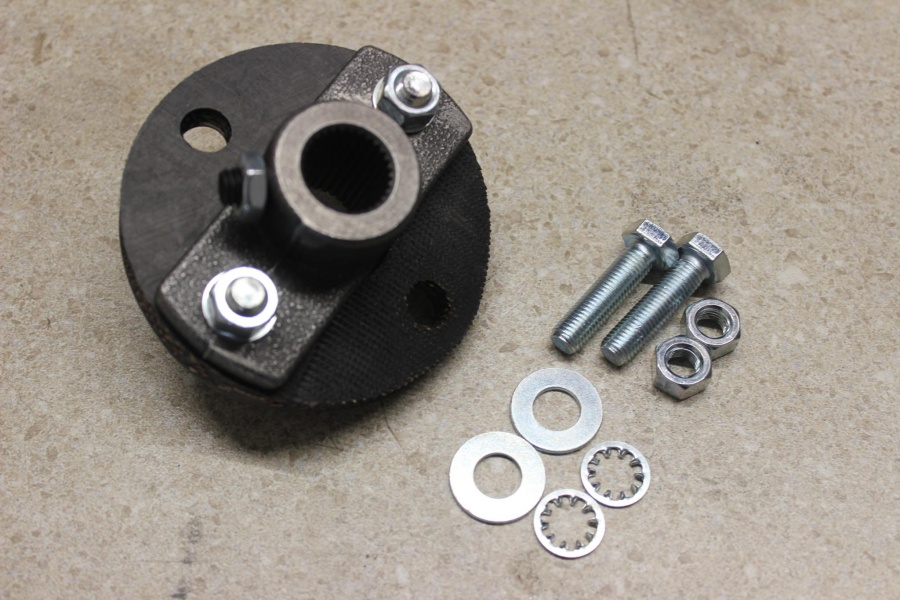 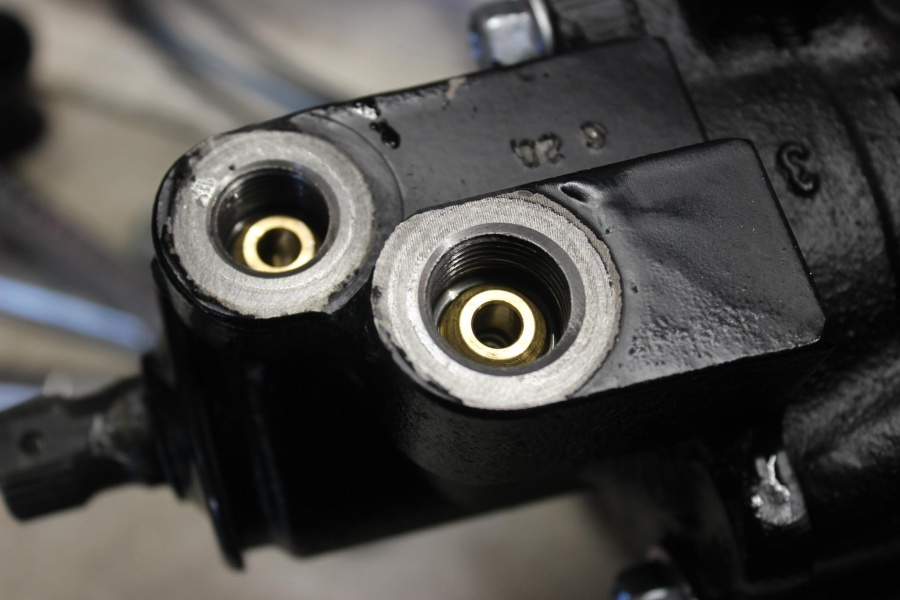 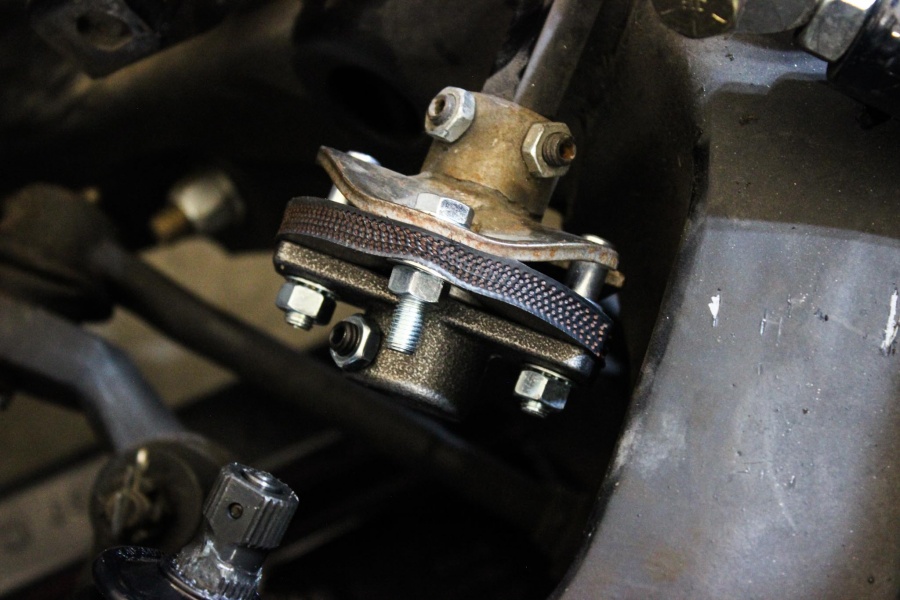 While we haven’t been able to drive it yet with the new box since there’s no engine, we can already tell all the slop we experienced in the wheel is already gone! We can’t wait to hit the road and test out this new 12:1 box. 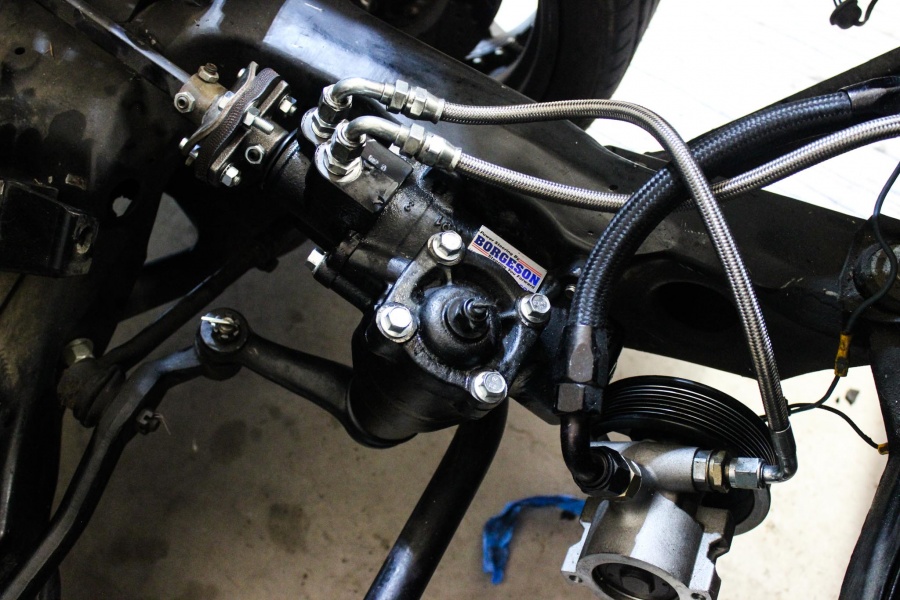