All photos courtesy of Chris Ocean

The 1966 Chevelle was, to date, the best Chevelle that Chevrolet had ever produced. After the success of the Z-16 option for 1965, the 1966 Chevelle Super Sports received the 396 cubic-inch power plant. These SS Chevelles terrorized and pummeled everything that lined up next to them, even for years to come.

For Joe Haniszewski, a basic SS 396 Chevelle wasn’t enough. Haniszewski wanted something with more power, more intimidation, and more – sinister. The definition of sinister brings up a list of words to describe it: evil, wicked, threatening, trouble, and ominous. All words that accurately describe Haniszewski’s Chevelle. He dubbed the term “SiniSSter” to fit the Chevelle, and carried that train of thought through-out the entire build. Joe is a gearhead through and through, and was born into it. He’s had several ’57 Chevy’s, one that’s awaiting restoration right now. He also owns a super clean 1969 Camaro. However, his Dad had bought a ’66 Chevelle new back in ’66, and Joe always loved that body style. The decision was made one day to pick one up, and he found this car in the Spring of 2013. It was a basic Chevelle, with a 283 cubic-inch engine and an automatic transmission. He had fun driving it around, until he went to the Syracuse Nationals and saw the autocross course. He wanted his Chevelle to be able to handle with the best of them, but also blow their doors off in the show circuit. He sat down with his friend Mike Lundeen, who sketched out the car and a plan was made.

Once the plan was laid out, Joe set to work on the Chevelle. Mind you, Joe also runs one of the largest shows in the state of New York, the Buffalo Motorama. His plan was was to debut the car at his show – but that meant planning a large scale show while restoring his Chevelle. Many long nights and early mornings and with some help from his Father and friends, he was able to meet his goal. Since it’s official debut, he’s racked up awards and miles, with many more to come. 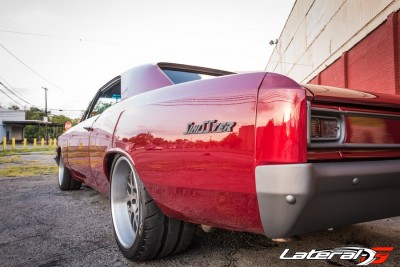 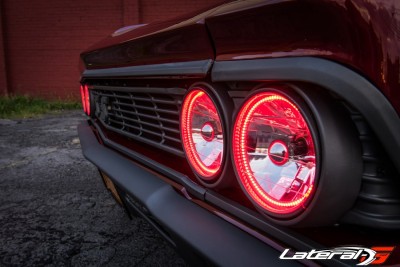 In order to get the car’s handling up to standards, Joe called up UMI Performance. They set him up with their complete suspension kit which includes new tubular upper and lower control arms in the front, and new tubular control arms out back. A set of UMI Performance two-inch lowering springs in the rear gets the stance just right. Completing the conversion is a set of Viking Performance dual-adjustable coil-overs at each corner.

For stopping power, Joe went with a set of Baer 14″ Pro brakes on each corner. The Baer brakes were plumbed with all new Classic Tube exact-fit bent brake lines and are are surrounded by a set of Forgeline DE3P wheels, 18×9 in the front and a massive 19×12 in the rear. A set of Nitto NT05 tires completes the package – 265/35/ZR18’s in the front and 335/30ZR19’s in the rear. As with any muscle car, the heart and soul of the car is the engine. That’s what separates the boys from the men, the Prius’ from the fire breathing Big-Blocks. Keeping true to the Chevelle’s roots, he started with a 396 cubic-inch Big-Block Chevy. In order to get the Big-Block more SiniSSter, he reached out to JanCen Racing Engine who did all the work. They started by boring it over a hair into 402 cubic-inches. In order to handle the air flow in the engine, JanCen installed a Comp Cams bumpstick and Edelbrock Pro Aluminum heads. From there an Edelbrock intake manifold was installed and an MSD Atomic EFI creates just the right fuel mixture. Expending the fumes is Flowmaster ceramic coated headers and a complete Flowmaster exhaust kit. Wizard Cooling custom built a radiator an installed dual Spal fans in order to keep under hood temps to a minimum. 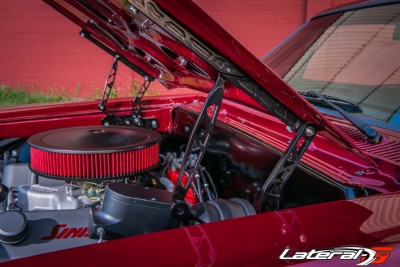 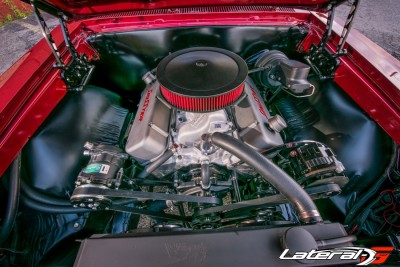 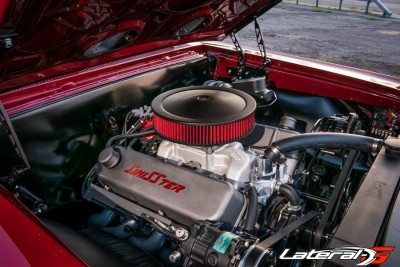 The Big-Block is mated to a Turbo 350 with a Gear Vendors Overdrive that allows that Big-Block to sip fuel while cruising down the highway through a Ford 9″ rearend with 3.55 gears.

From Cool Blue To SiniSSter Red

The outside of the car had to have a SiniSSter look to match everything else. After sandblasting the entire shell they found out the rear quarters had already been replaced a few times. In order to accommodate the ABC Performance mini-tubs and correct the rear quarters, they decided to install all new metal from Dynacorn.  Joe’s friend John Sebastian completed all the body work and laid the GM Red Jewel Tintcoat in his shop, while Derek Main completed all the custom frame work. 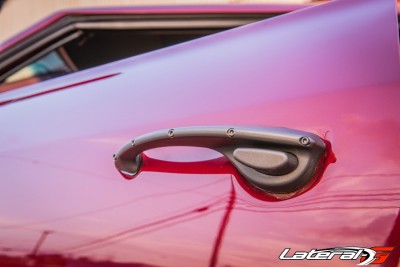 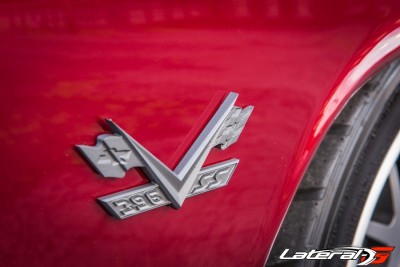 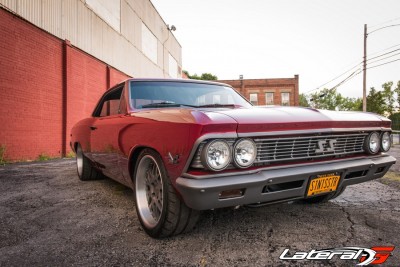 Some of the other subtle details you might have missed is the shaved dripped rails and door locks. Other details include all custom SiniSSter emblems for the fender, grill and quarter panels machined by Myles Tool and Dye. All the chrome and stainless on the car were given the SiniSSter treatment as well by ceramic coating them in Titanium Silver. Finishing off the exterior a set of Ring Brothers billet door handles and hood hinges were installed to complete the SiniSSter appearance. Bustin’ At The Seams

With the rest of the car looking SiniSSter as can be, Joe knew that the interior had to match as well. A standard black interior, while it would look nice, wasn’t up to standard. He wanted it to scream SiniSSter! He started by rewiring the car using a complete Painless Performance wiring harness. In order to keep himself from sweating, a complete Vintage Air unit was also installed. A set of Dakota Digital VHX gauges were installed to keep tabs on the engine and speeds of the car. SONUS Car Audio and Underground Autosound stepped in to raise the bar for the interior by building completely custom door panels, console, rear package tray and the trunk in just a week using all black leather. The front seats are out of a late-model Mustang, with a set of TMI Products Sport XR series covers and foam, along with a matching seat cover for the rear seat. A Billet Specialties steering wheel finished off the interior of the car. If you want to see more of Joe Haniszewski’s Chevelle, make sure to check out the massive gallery of pictures below, all shot by Chris Ocean. If you want to see some of the progress pictures of the build, hop on the SiniSSter Chevelle Facebook page, or come to the Buffalo Motorama and see it in person!