With the wild success of the 1964 Mustang, Ford made some improvements in order to continue that success with the 1965 model. These changes include going from a generator to an alternator, relocating the oil filter, high horsepower motors along with some other minor updates with the interior. The most important improvement was the availability of the Fastback. This new sleek design is what we see here.

Just as the Mustang’s performance progressed over the years, Mario De Leon’s has done the same. You see, Mario’s Mom bought this Mustang brand new way back in ’65. Within that first year of ownership, Mario’s Dad started to modify the car for that 60’s look. The ‘Stang had been worked on but years of use took it’s toll on the family Fastback. This fourth re-incarnation of the ‘Stang took place back in 2005. “During this last build, I was diagnosed with cancer,” explained De Leon. “The assembly was therapy for me.” 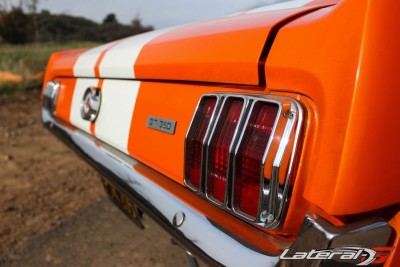 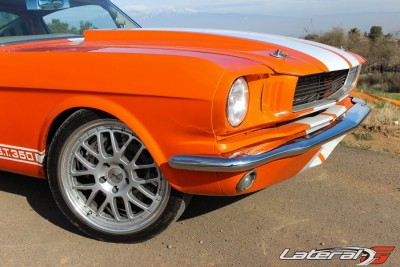 Starting with the body, Mario cleaned up things by shaving the door handles and all the trim. From there he filled in the cowl and molded the rear valance. He also bolted on a cowl induction hood with billet Eddie Motorsport hinges to help his engine breathe a bit more. After the body was up to his liking, Mario painted the car himself with House of Kolor Tangelo Pearl with white pearl stripes. One small detail that most miss on the paint is the addition of ghost flames on the stripes themselves. With the body shining bright as the sun, Mario turned his attention to the engine. Having a Mustang Fastback with bright orange paint and racing stripes, a regular rebuild of the stock engine wasn’t up to his standards. Mario wanted to make sure the engine was up to par with the rest of the car. Starting off he punched and stroked the engine to 349 cubic inches. 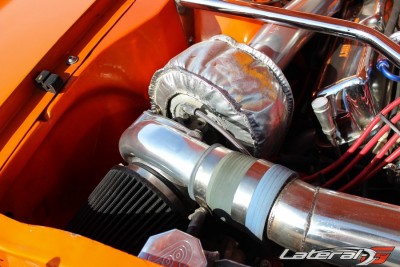 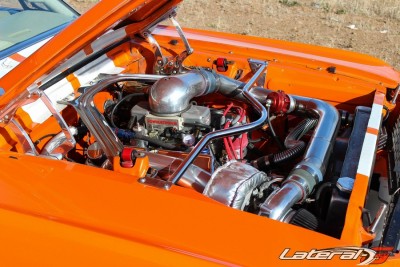 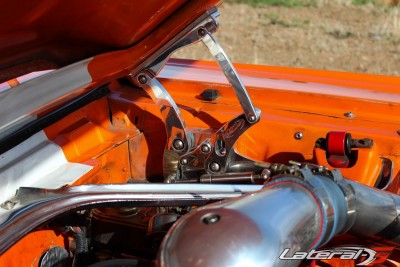 A Scat crank with custom ground turbo camshaft completed the rotating assembly. A set over 205CC Avenger Ported heads made sure there was plenty of airflow coming into the cylinders. An Edelbrock Victor Jr. intake mated with a blow-through PowerJection EFI throttle body finish off the top end along with an MSD ignition. The cherry on top was the Master Power 70MM turbocharger and custom turbo headers, to satisfy De Leon’s need for power. With minimal amounts of boost the power plant makes 521 horsepower at the weels and 588 lb.-ft. of torque. With the blip of the throttle this Mustang can boil the rear tires! Mated to the engine is a T-5 Tremec transmission with a Centerforce DYAD clutch, which is connected to a Currie 8″ rearend with 3.80 gears. With the engine and body in shape, the time came for the suspension to be up to par with the rest of the car. The front suspension consists of cut down Shelby coils, Edelbrock IAS shocks, boxed arms and roller perches. The rear suspension includes Maier Racing 165 lb. lowered leafs with Shockwave shocks. 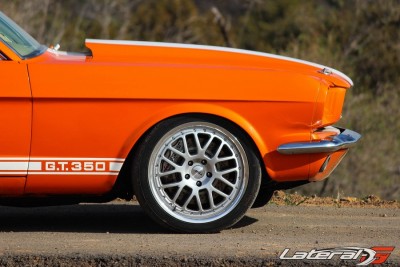 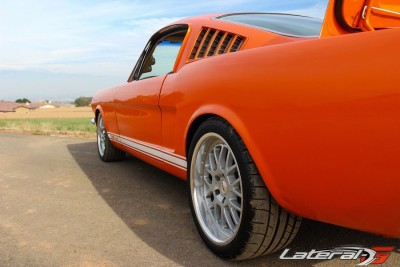 Once the suspension was dialed in, a set of Master Power brakes were installed – 13″ Pro Driver series in the front with billet calipers and in the rear 12″ Pro Diver series with matching billet calipers. A set of 18×8″ TSW Valencia wheels in the front and 18×9.5″ in the rear with Mickey Thompson Street Comp tires wrap up the Master Power brakes and keep the car firmly planted to the ground. Just As Pretty On The Inside

Mario is a Sales Manager at TMI Products – a company that makes some of the best interiors around. With that being said, that means Mario’s Mustang can’t have a stock interior in it. His Mustang has to have the best interior and match the rest of his ride. To start, he opted for TMI’s Sport XR line, which has the ultra-sleek grommets in them. The color picked to contrast the Tangerine Pearl paint is a 2005 Mustang saddle and suede, staying true to the Mustang line. 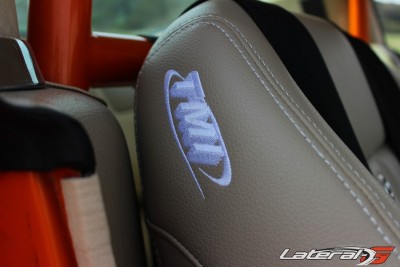 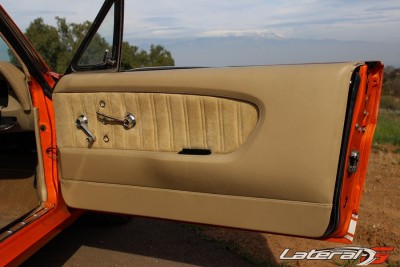 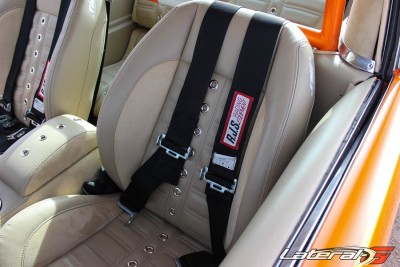 TMI Products put their touch on the rest of the interior by installing one of their custom dash pads, molded door panels, molded one-piece headliner, Sport trunk kit and Sport console. Finishing off the interior is a set of Dakota Digital VHX gauges along with Scott Drake billet interior accessories through-out. One of Mario’s previous jobs was installing car audio equipment. That means this ‘Stang is packed with audio equipment – an Eclipse head unit with Phoenix Gold components front and rear, Phoenix Gold 1600 watt 5-channel  amp, and a pair of JL Audio 10″ W3 subs to round out the package. A Vizualogic Smart Logic tablet runs the audio system and fine tunes the throttle body set up. Just like any true gearhead, Mario isn’t finished with the car. “I have plans to update the suspension to newer technology, perhaps some coil-overs or air bags, hint-hint” laughed Mario. We can’t wait to see what he comes up with next!