Champion Cooling Systems To The Rescue

Right now it’s summer. It’s hot. We feel it and our cars do too. If you’re going to drive in the summer or try to survive Power Tour, you need a cooling system that’s up to par. Our 1955 Bel Air build has an aluminum radiator and electric fan so it should be good to go, right?

Wrong. The no-name radiator fits in the stock mounting location but it’s smaller and only has a single fan on it. All winter long it works fine but when things start to really heat up so do the temps on this car. In addition we are getting ready to add air conditioning to it which will also increase the load on the engine which can cause it to overheat even easier. 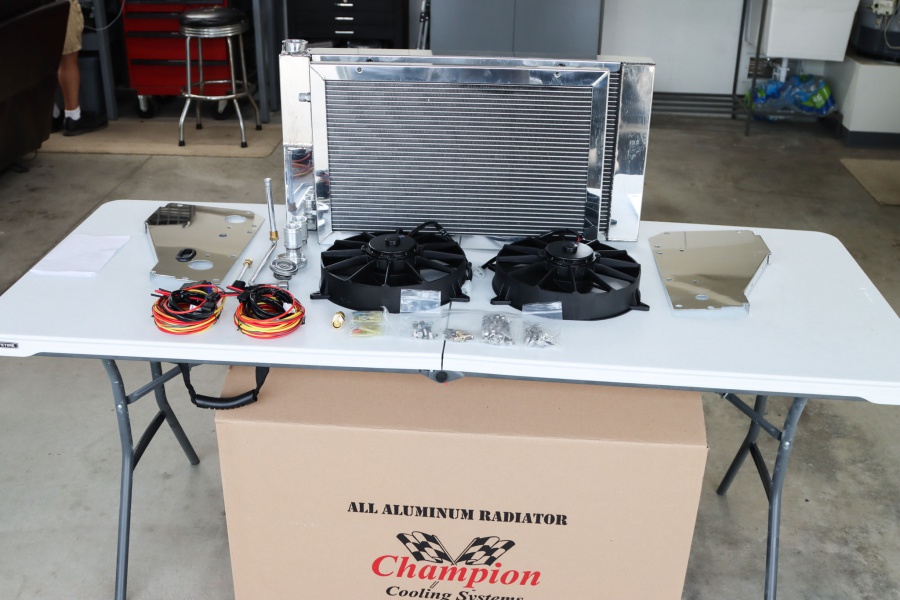 Since we bought this car we have slowly been redoing things the right way. It was a running and driving car but it soon became apparent that a lot of corners were cut and it just wouldn’t work out in the long term. The radiator was no exception – it worked halfway but really wasn’t up to par.

We reached out to Champion Cooling Systems after overheating yet again. We were done, we were tossing in the towel. Time to get the right parts. “We have a few different options for you. We can do a standard replacement high performance radiator that will fit in the stock location, or we can do our top-of-the line set up that dramatically increases the cooling,” stated Michael Harding of Champion. We said send us the best you got, we want to do this once, and do it right. 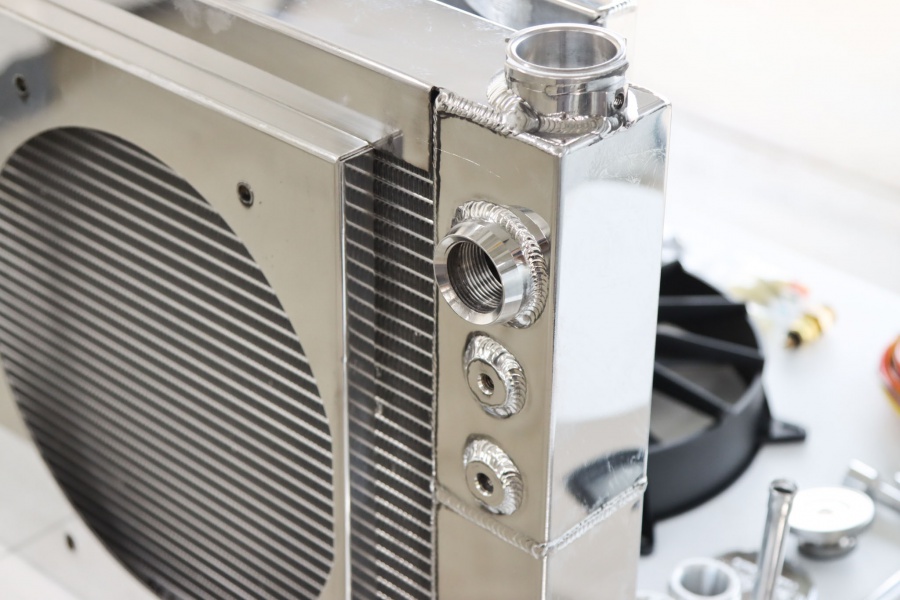 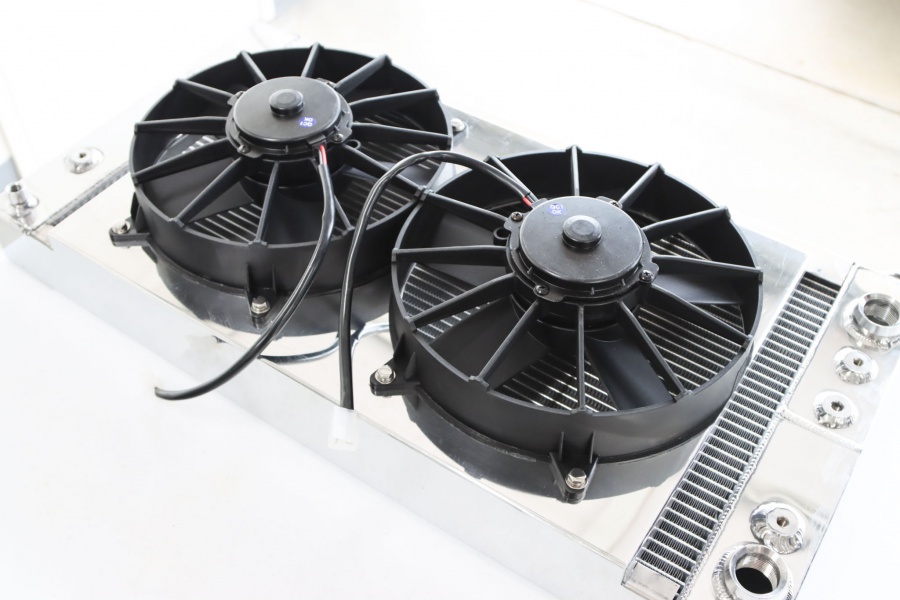 Michael sent us a Double-pass crossflow radiator that’s actually a bit wider than the factory set up. Instead of the tanks being on the top and bottom the tanks are on the sides, so we weren’t quite sure how all the hoses routed or even how it mounted, but we would figure that out when it all showed up. This set up also includes dual electric cooling fans and the condenser ready to bolt right in and even has hard lines to plumb it. We also opted for the show-quality finish and let’s just say you can use the radiator or baffles as a mirror if you need to check your hair out.

The first step on our end was to remove the current set up. That just required us to drain the radiator, pop off the hoses, and disconnect the cooling fan. The new set up mounts to the front of the core support like a Six-Cylinder car would; these tabs that stick out have to be cut off pretty much flush to the core support but that’s an easy task with a cut off wheel. 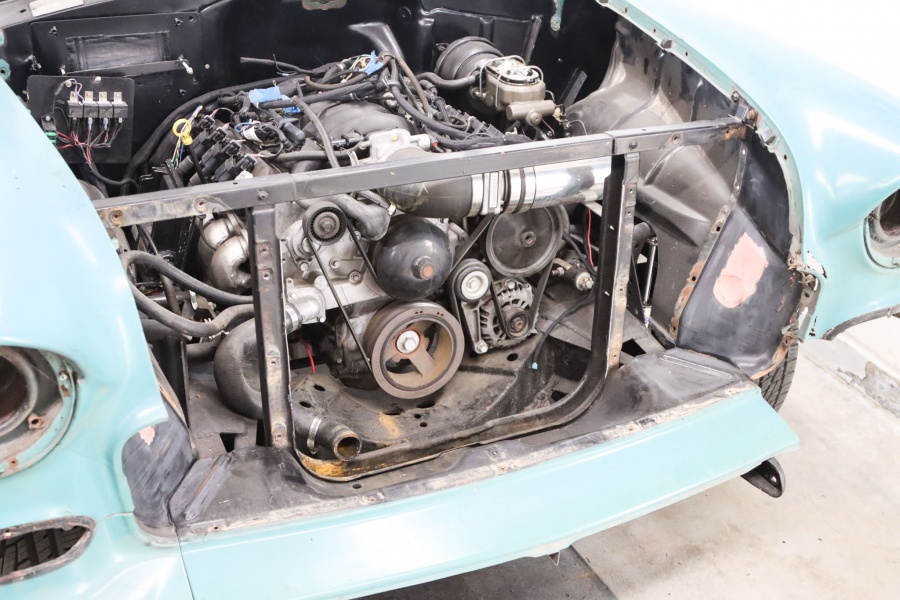 Believe it or not, the rest of the installation was completely bolt-in. To start we removed the side panels or “baffles” that mount to the sides of the core support. Champion Cooling provides new ones with all the holes cut out, but they do supply a template if you choose to drill your stock baffles. These are held in place with a few bolts and screws – the old ones popped out in a few minutes and the new ones popped right in. 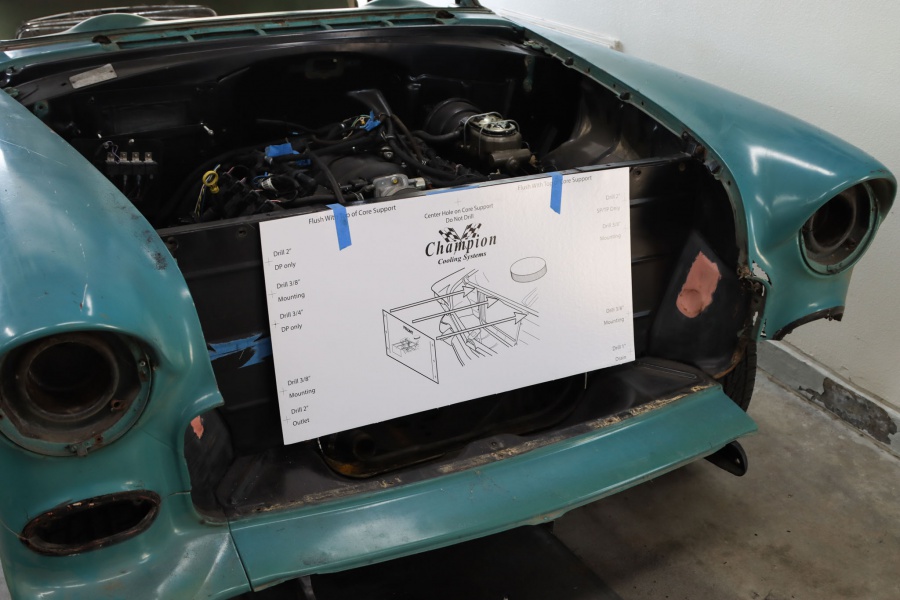 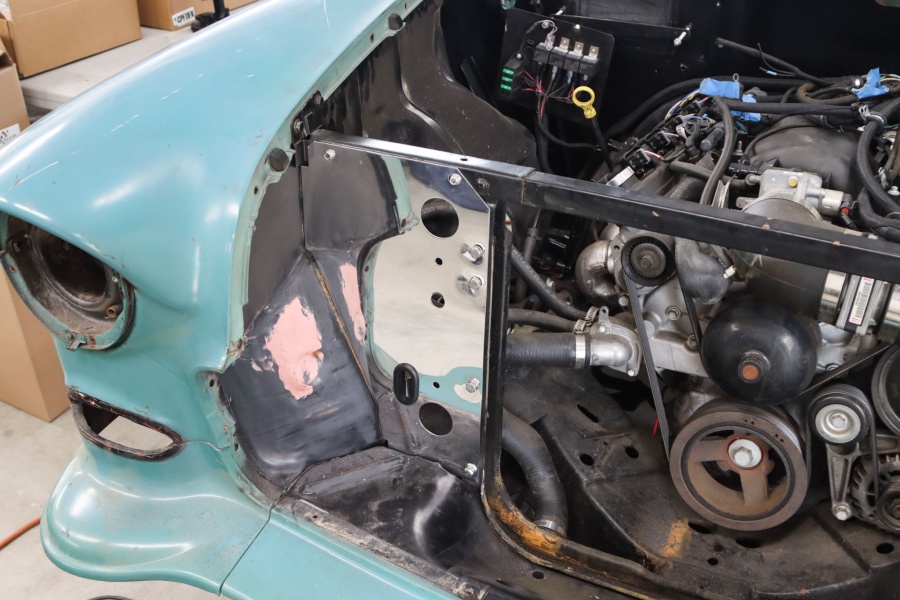 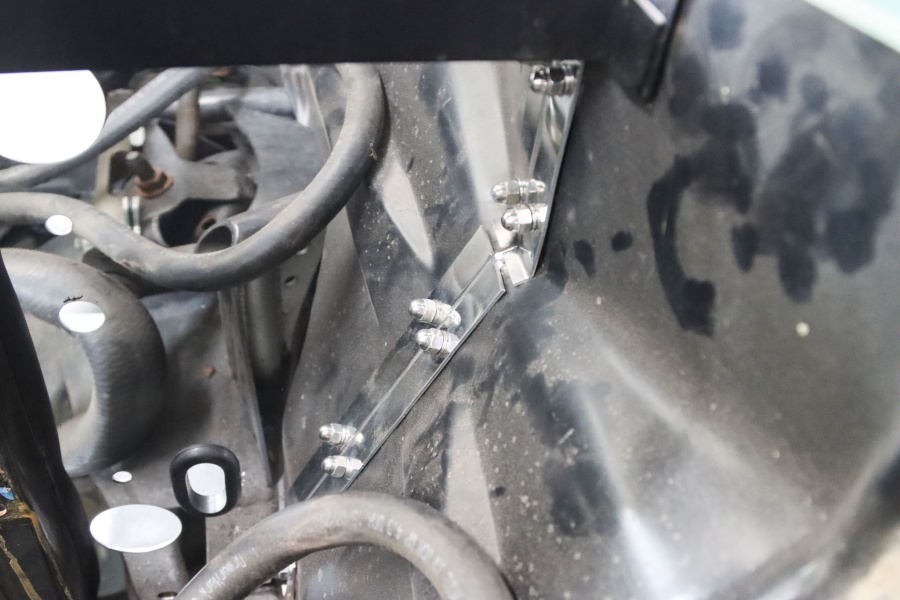 Before we installed the new radiator we wanted to pre-assemble a few pieces. The fan shroud is already installed on the radiator but the cooling fans aren’t; using the supplied bolts they were installed in a few minutes. The inlet/outlets also have to be installed. One trick thing we like is these fittings are simply ORB fittings, but Champion offers them in standard hose barb sizes such as 1.25″, 1.5″, 1.75″, -16AN or -20AN. It’s important to note on these you need to use a little bit of anti-seize to ensure they don’t gall up on you. 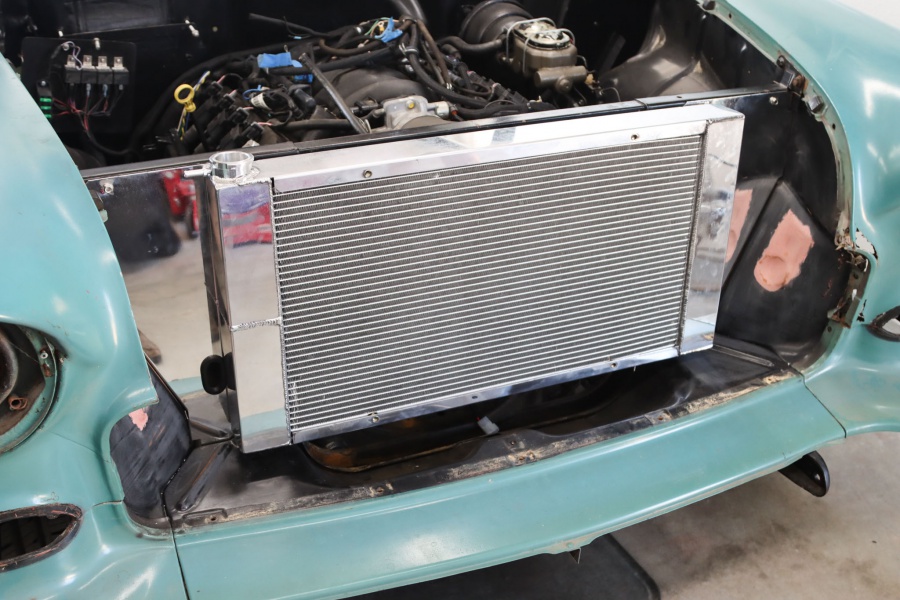 One thing is we didn’t install the petcock fitting at this point. It won’t fit through the hole in the baffles, so you have to install it afterwards. Our last step was to flip over the radiator and install the condenser using the supplied bolts.

After that we slid the entire assembly into place and the radiator mounts to the new side baffles. With the radiator firmly in place, we then threaded in the petcock valve and threaded up the A/C lines that run from the condenser past the baffles to inside the engine compartment. Our last few steps were to wire up the fans, find some hoses at the local parts store, and fill the radiator up with the manufacturer recommended Peak Antifreeze and distilled water. 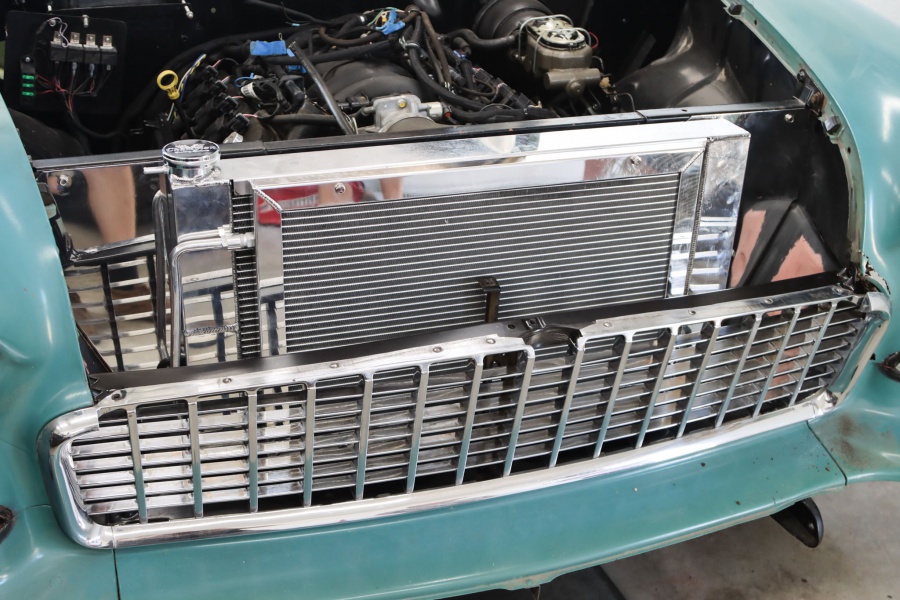 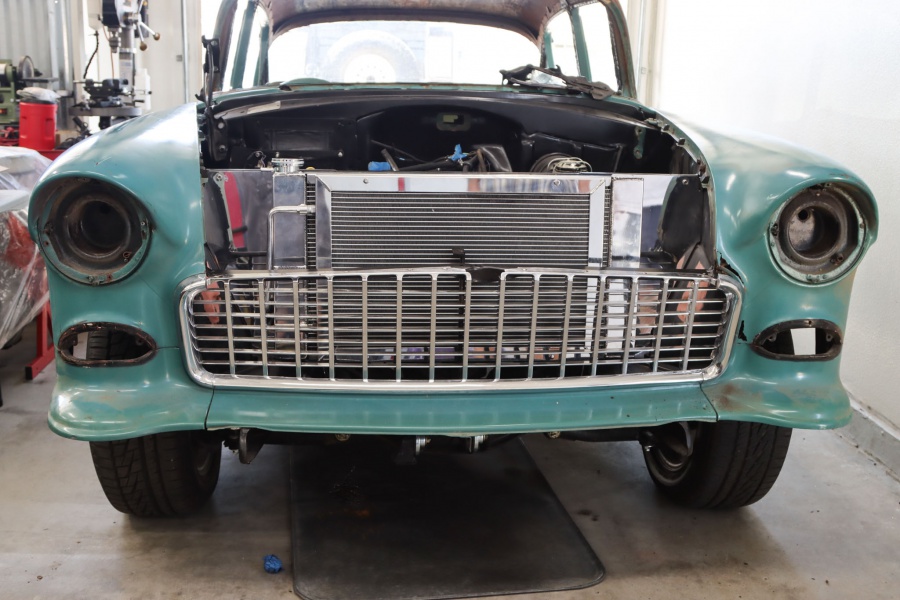 We have a few more projects to wrap up before we can really put this new set up through it’s paces, but there’s no doubt this Champion Cooling setup is going to work flawlessly and keep the engine cool no matter what we throw at it. 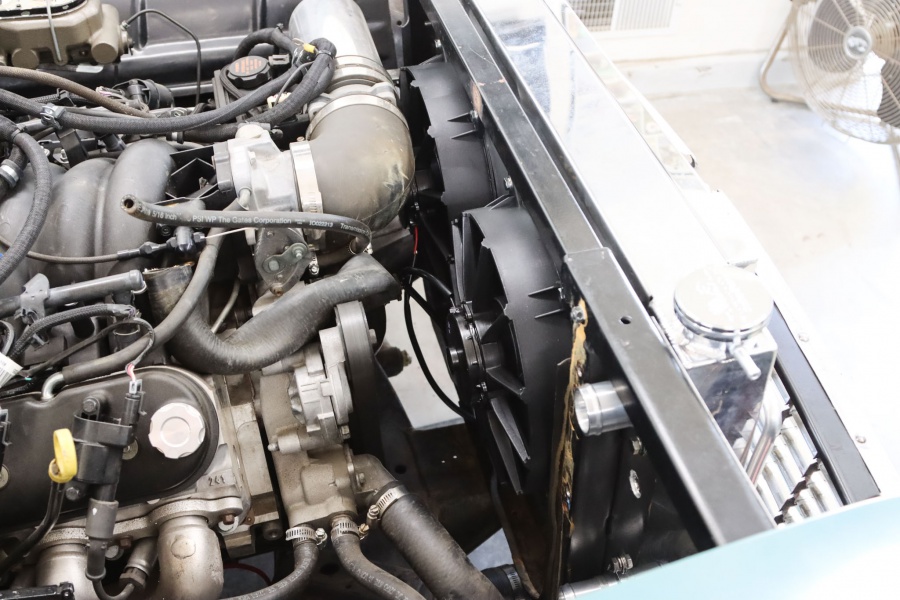 Champion Cooling has a wide variety of radiators and cooling components. Hop on their site at www.championcooling.com or give them a call at (951) 245-9464 for more information.