On our 1965 Chevelle, project Teachers Pet, we experienced a problem that many people run across – throttle linkage. This is especially true with motor swaps, and going from a traditional engine with a carburetor to a fuel injected motor with a throttle body. In our case, the original SBC was long gone, and we had installed a warmed up LS2 several years back.

In an attempt to keep the interior looking factory as possible, we opted to not use an aftermarket pedal and try to retain the factory pedal. We used a cable system, and fabricated a bracket off the factory pedal linkage that would allow us to use the factory pedal. While this worked, it was pretty bad. The geometry was all wrong, causing the pedal to be extremely stiff. Trying to feather the throttle to disengage the clutch was quite the task, and any attempts at keep the throttle below wide-open-throttle was just about impossible. 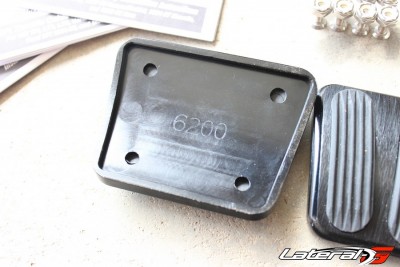 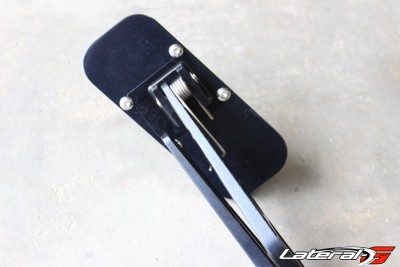 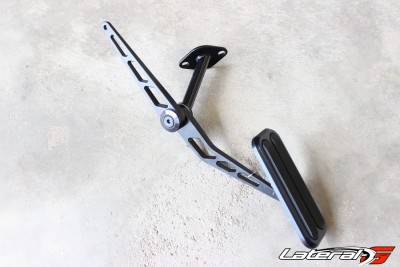 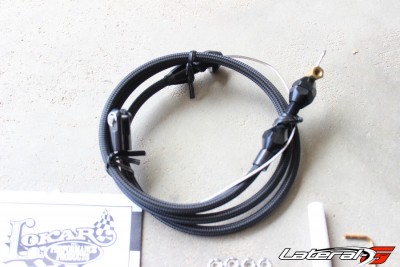 We caved in and decided that we needed something that will work, so we decided to upgrade to a modern pedal system. Hopping on Lokar Performance’s website, we found exactly what we needed – a bolt in pedal assembly, specific to this car. We gave a call to Mike Waldo, who filled us in on these pedals. “This is a 100% bolt-in throttle pedal assembly, for those looking to upgrade to a cable, instead of a physical linkage. The only modification needed is a small hole in the firewall for the cable to pass through. We also offer a universal-fit throttle-by-wire version as well,” stated Waldo.

We really liked the Midnight Series of the pedal assembly, and picked up a Midnight Series throttle cable to match. We also decided to pick up matching pedal pads, to cover the clutch and brake pedals which not only look better than stock, but have grooved rubber inserts to help with keeping your foot on the pedal. Starting with the gas pedal, we disassembled and removed the factory set up. This required removing the two screws that hold the factory assembly in the firewall – save the screws, you’ll need them for reassembly. The stock pedal is attached to the floor with two ball studs, simply pop the pedal off and remove the ball studs.

Installing the new pedal assembly requires that you take off the arms from the mounting shaft. Sliding the shaft into the inside from the engine compartment, we reattached with the two screws. Then we slid the arms back onto this shaft, marked the hole in on the firewall, and drilled it. 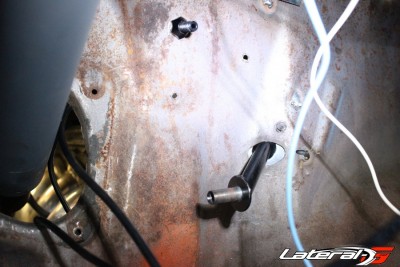 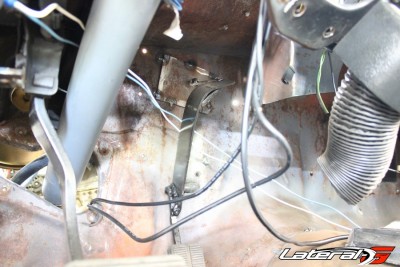 The hardest part of this install, which isn’t hard at all, is getting the geometry correct. Where gas pedal pivots, there is a notched insert that allows you to change the angle of the pedal arm, and cable arm. We wanted to make sure that when we reached wide-open-throttle, the pedal hit the floor, and not the throttle body stop. This required one of us to watch the throttle body, while the other put the arms together on different notches. After about 3 or 4 tries, we had it perfect and moved onto the pedal pads. When you have a slick looking gas pedal like the one from Lokar,  you want the other two pedals – or one other pedal – to match as well. We liked that they also have the rubber inserts in them, so our foot doesn’t slide off. They are functional and look bad ass too! 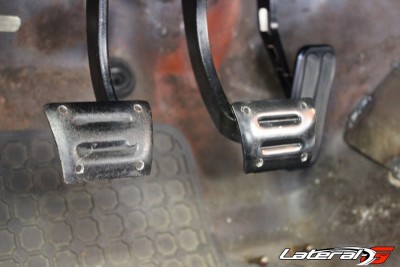 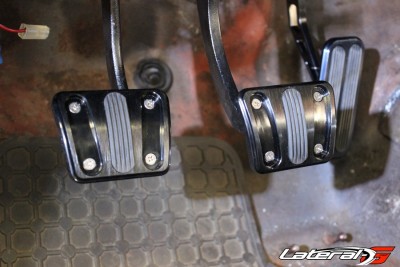 Installation on both of these is easy as pie. We started by marking the holes in the covers on the pedals themselves with a sharpie marker. Then we drilled the holes, and attached the covers with the supplied bolts. The last step was to use the supplied glue to install the rubber inserts. Naturally as soon as we got the gas pedal assembly and the pedal pads installed we had to go take the car for a spin. Nothing but smiles from us with the new, correct geometry on the gas pedal. The pedal was smooth as butter, allowing us to feather the throttle when engaging the clutch. Remember that before this was impossible and the throttle was either off or on, with little chance of being in-between making the car almost un-driveable.

But what if you went really modern and have a throttle-by-wire pedal assembly? No problems there either as Lokar offers universal-fit throttle-by-wire version that looks just as killer as the cable driven version.

For additional pictures, check out the gallery below: