Back in August, we took our 1962 Cadillac on the Hot Rod Power Tour and had a blast. With an LS, A/C, Disc Brakes and lots of other upgrades, this car is a blast to drive. This was the farthest we had ever driven it and naturally a few issues raised up. One of them being a fuel supply issue where the car would sputter, lose power, and then shut off. After sitting for 20-30 minutes it would then drive again for another half hour.

When we did the LS swap, we used a lot of parts we had laying around such as this in-line filter and pump. For years its worked flawlessly but obviously the right storm of things came up and we had issues. We spoke with fuel pump manufacture about it to learn some more about this pump and how we have it set up. Even though it’s gravity fed, we were experiencing vapor lock. 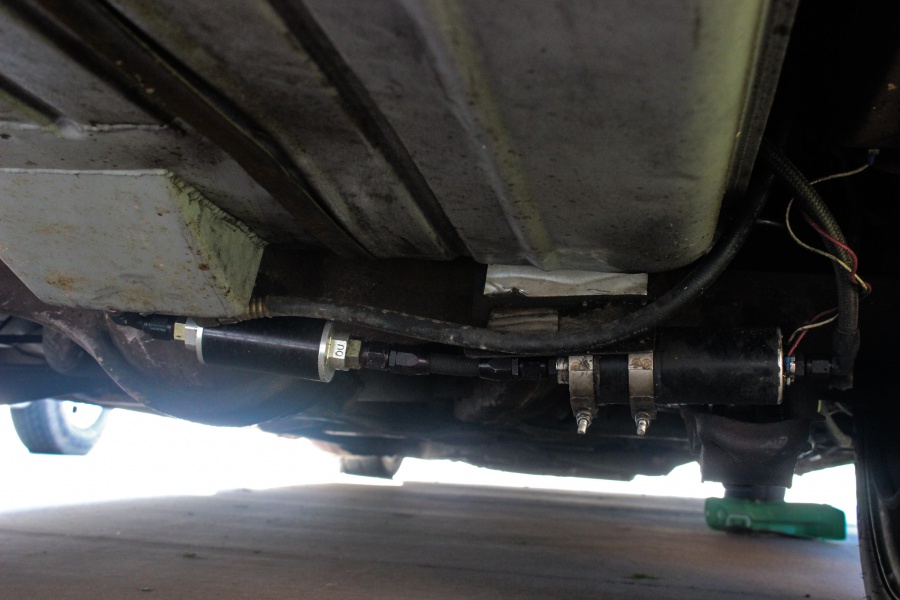 Vapor lock on an LS? You bet. First, it was really hot out and we were driving for hours on end only 6″ from the smoking hot asphalt which heated up the fuel in the tank. Then we are running a full length return, which means the fuel is pumping to the fuel rails, getting heated up, then some of it pumping back to the tank. Both of these combined raised the temperature of the fuel in the tank.

Lastly, the pump itself. Even though it’s gravity fed, it’s still pulling a ton of vacuum on the fuel. When vacuum is applied, it lowers the boiling point – opposite of how a cooling system is pressured to raise the boiling point. When all three of these issues were combined, we experienced cavitation. To test the point, the rest of the Power Tour we drove early in the cool mornings and had zero issues. 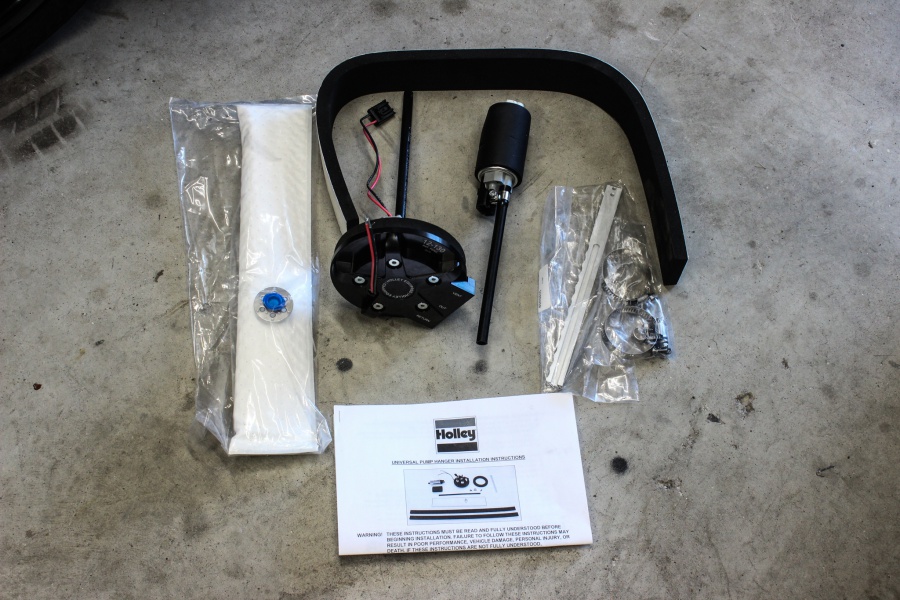 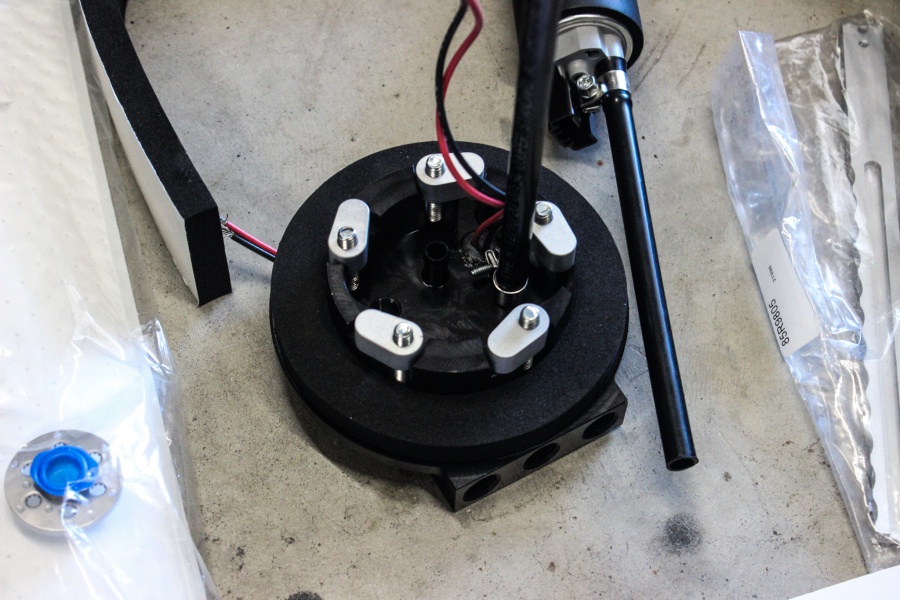 At this point we knew this set up wasn’t going to work with the car anymore as we want to continue to drive long distances through any weather with it. We called up Holley and ordered up a 12-130 In-Tank Retrofit Fuel Pump set up. This is an in-tank pump that’s designed to work with just about any fuel tank you can imagine. This will keep the pump directly in fuel at all times which will prevent cavitation like we experienced.

The first thing we had to do was drain the fuel and drop the tank. We actually used the current in-line pump to pump all the fuel out into some fuel cells. Then we disconnected the lines, wires, and dropped the tank out. After reading the instructions we see that Holley requires a minimum of 7″ in order to get this pump in. Our tank is only 6″ deep, but because we have the sump welded to the bottom we are able to meet that minimum requirement. 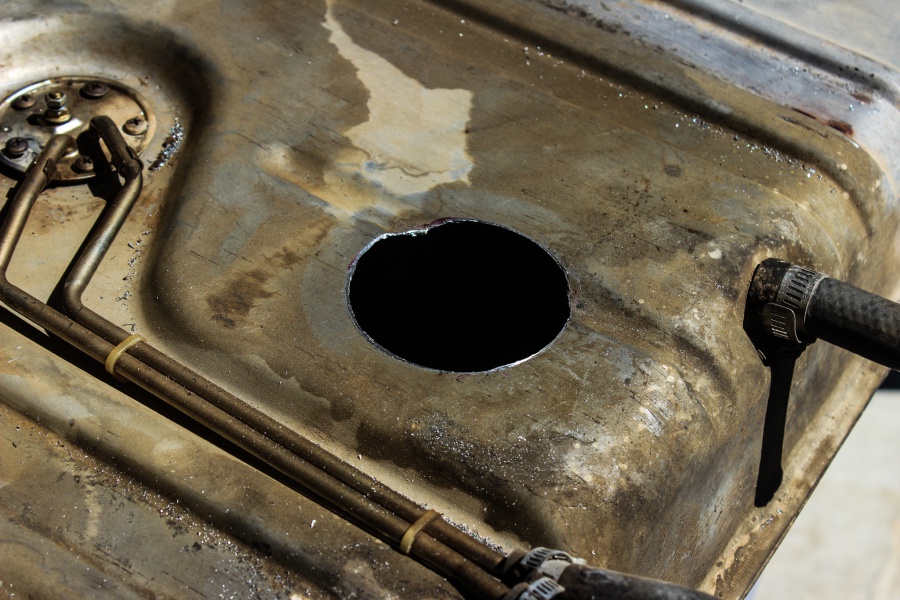 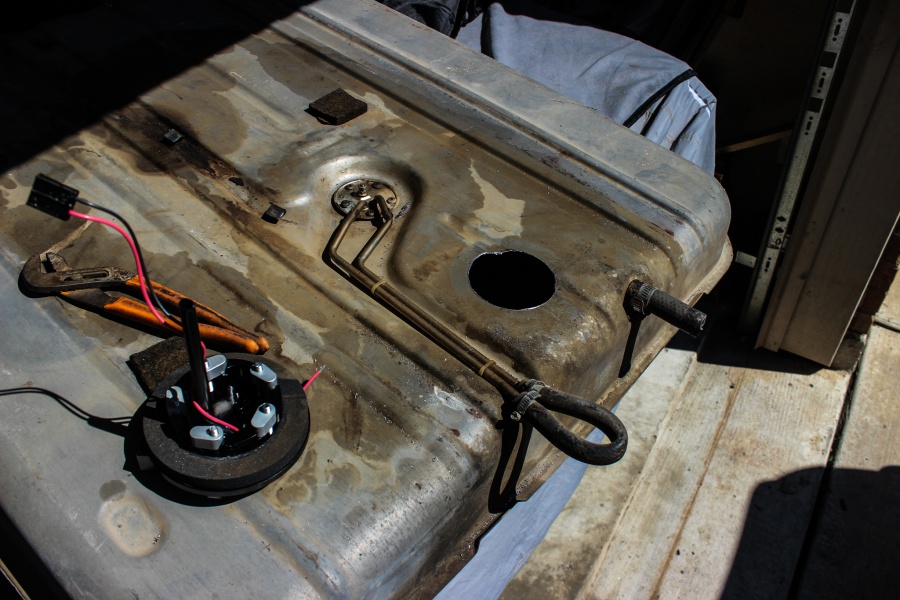 A 3.25″ diameter hole is required to be drilled in order to slip the unit inside the tank. Most of these old car tanks are ribbed, which isn’t a problem. The foam will still seal up in a ribbed area as long as they aren’t deeper than 1/4″. Where we were drilling had one rib in the middle of the hole.

How this set up works is by sealing with a thick foam gasket. Then when you tighten down the bolts, little arms come up to grab the tank and pinch it all to the tank to seal it up. The unit features 1/4″ NPT supply, return, and vent connections. We decided to reuse the return we already had and the tank already has a 1/2″ vent tube, so we capped those off. 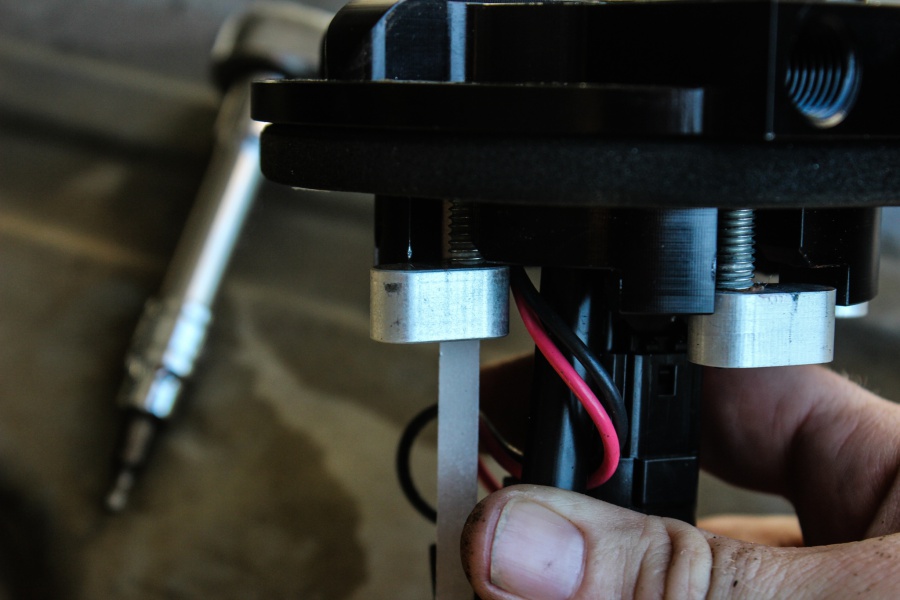 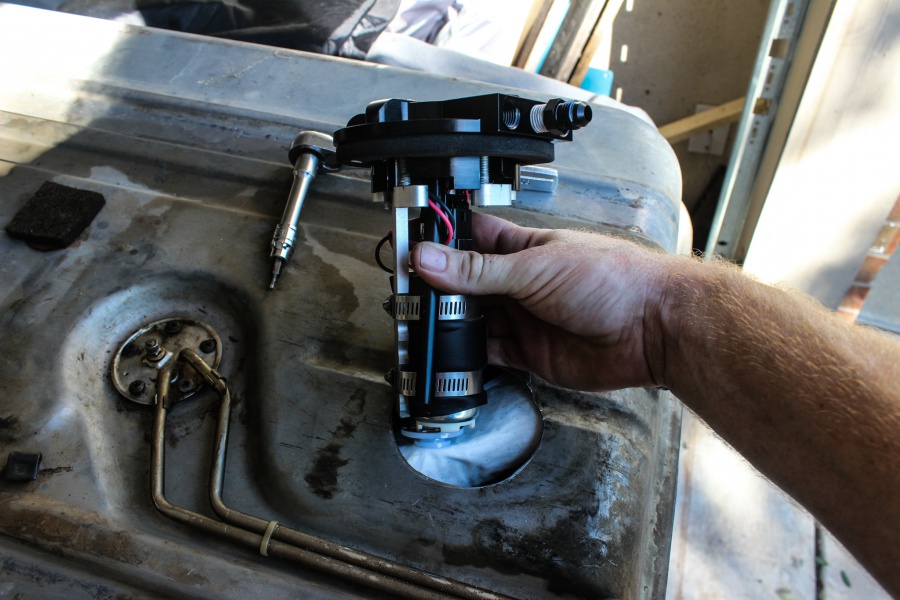 We did have to measure and trim the return hose along with the supply hose to the pump. With those trimmed we then attached the pump to the unit with the supplied hose clamp. Then we installed the support arm after shortening it up. Using the two large hose clamps we attached the pump to the arm to keep everything secured. The last prep step was to install the Hydra-Mat on the bottom of the pump.

The Hydra-Mat isn’t just a fancy looking filter. This is an element that will absorb and suck fuel, even if the pump is out of the fuel. We’ve seen videos where just the tip of Hydra-Mat is in fuel and the pump is still pumping with zero bubbles. We positioned it so that it’s in the sump area but also pops out in order to keep it submerged at all times. 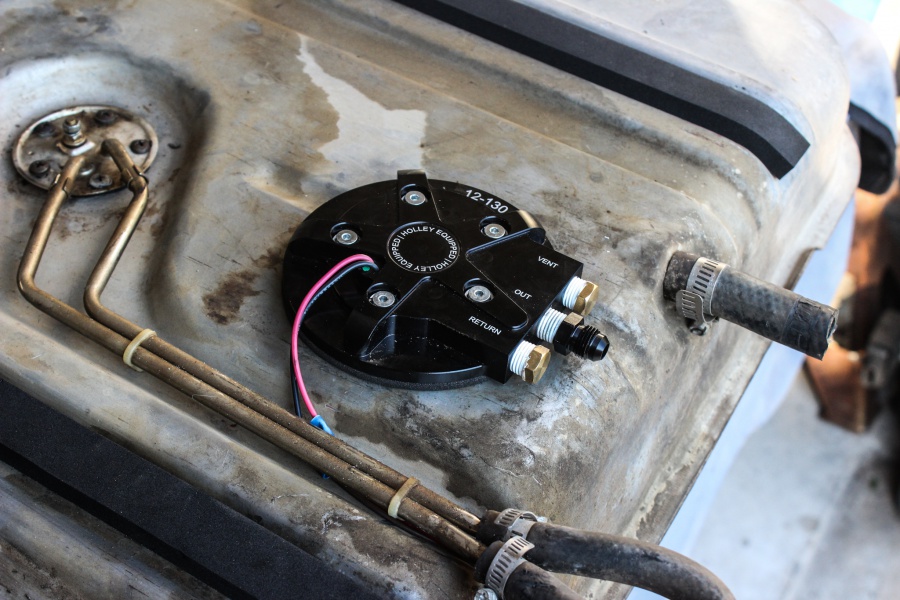 Then we slid the entire assembly down into the tank, tightened down the bolts, and that’s about it! Our last step was to put the tank back under the car, wire in the pump, and connect the lines. When that was finished we started the car right up! Not that the old pump was loud, but this one is almost whisper quiet and can’t be heard. We are impressed and ready to hit the road for more trouble-free cruising!