With summer coming, making sure your cooling system is up to date is crucial. Nobody likes to have their car overheat and be stuck on the side of the road. If you’re trying to do some driving events such as the Hot Rod Power Tour, then having a proper cooling system is absolutely essential. Usually the Power Tour is hours of driving through heat, sitting in some traffic, and doing it over and over again. Power Tour puts any cooling system through it’s paces. 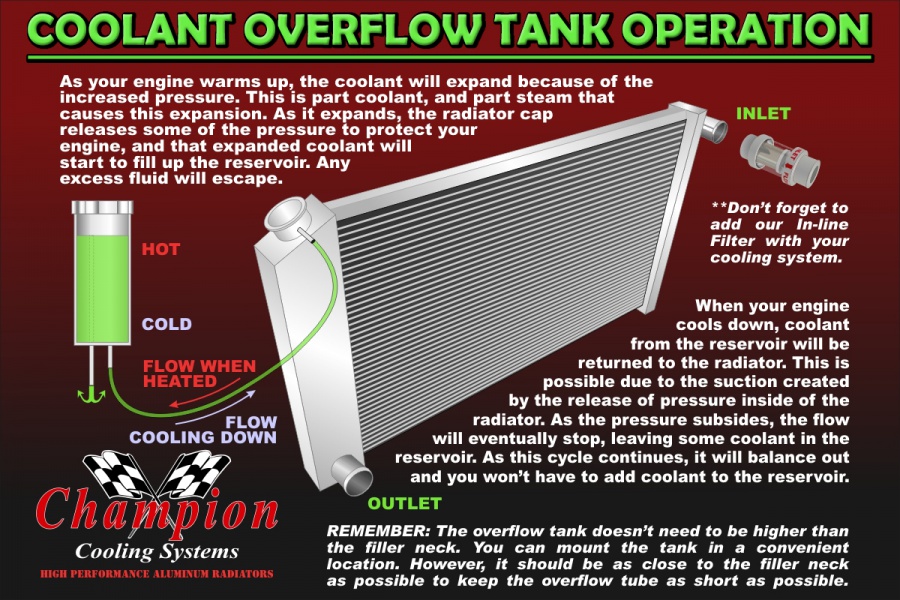 “Overflow tanks were added to cooling systems to catch the overflow and store it, instead of leaving it on the ground. This was good for radiators, and much better for our environment. Different manufacturers called them different things: overflow – to catch the overflow from the radiator; reservoir – to store the captured coolant; or recovery tank – to recover coolant that was expelled when the pressure increased,” explained Harding. 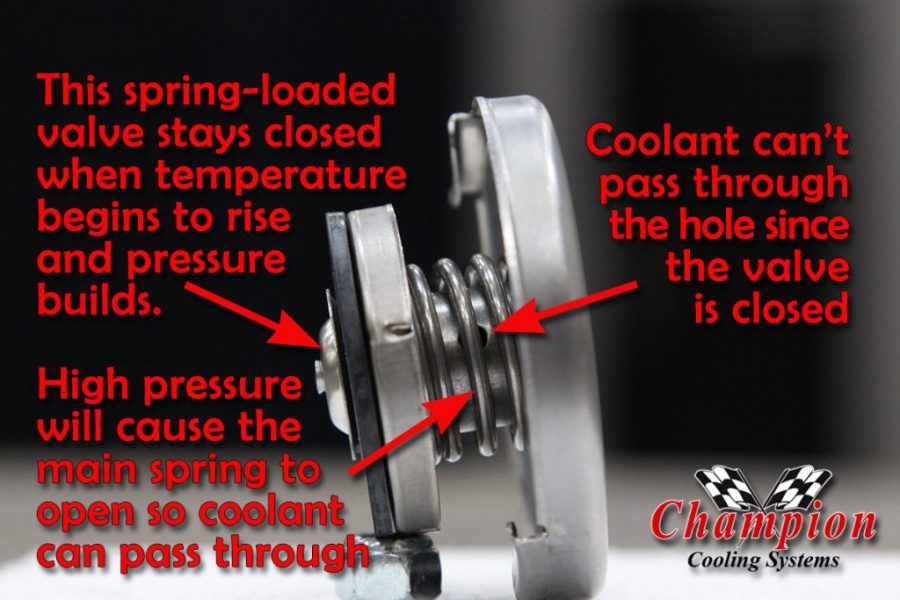 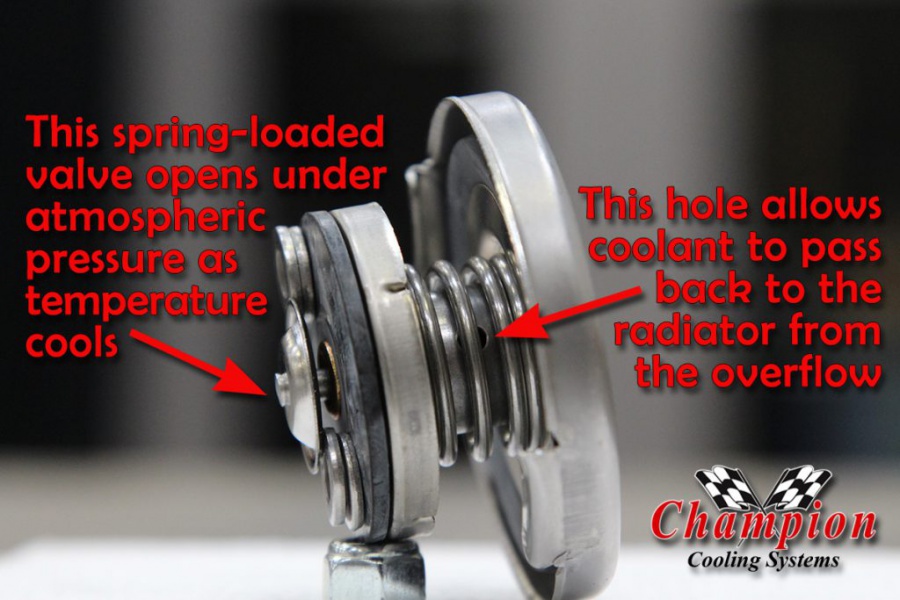 The heavy spring on the radiator cap that can be seen is compressed when pressures reach roughly .9 bar (13 psi). The smaller spring that can’t be seen is how coolant is returned – through the center of the cap.

The process of returning coolant back to the radiator is possible because the combination of the reduced steam pressure allows the atmospheric pressure to push coolant from the tank back into the radiator through the vented radiator cap. This, in turn, adds more coolant to your system and helps to keep the engine a little cooler.

Many plastic tanks have a ‘cold’ and ‘hot’ mark; those marks indicate where the coolant should be in the tank during cold cycles (non-running) and hot cycles (engine running). It’s really just a guide, however, filling the reservoir during cold cycles just means that you will likely end up with coolant on the ground. For this reason, overflow tanks/reservoirs, recovery tanks have their own vent. Expelled coolant will enter the tank from the bottom, and when the level rises it will expel through the vent tube. 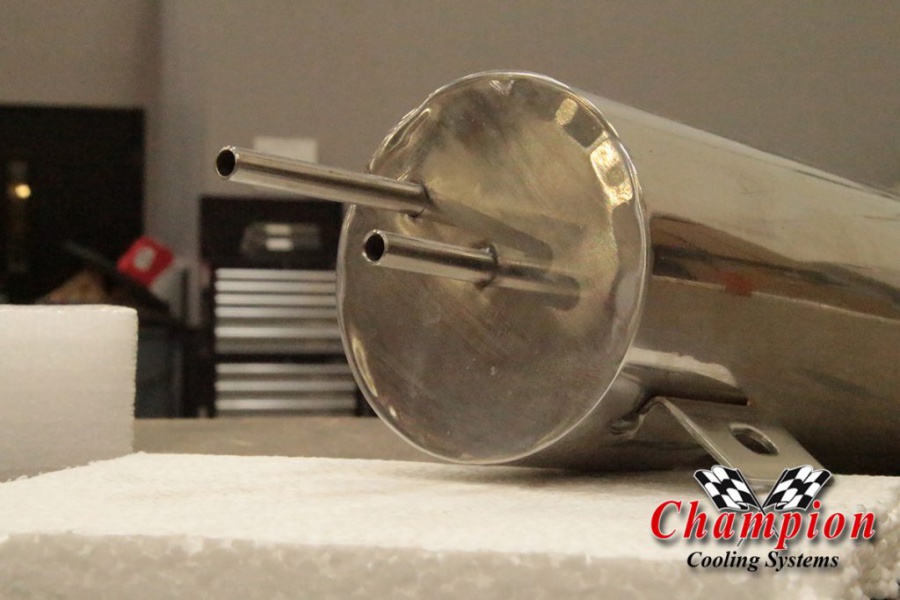 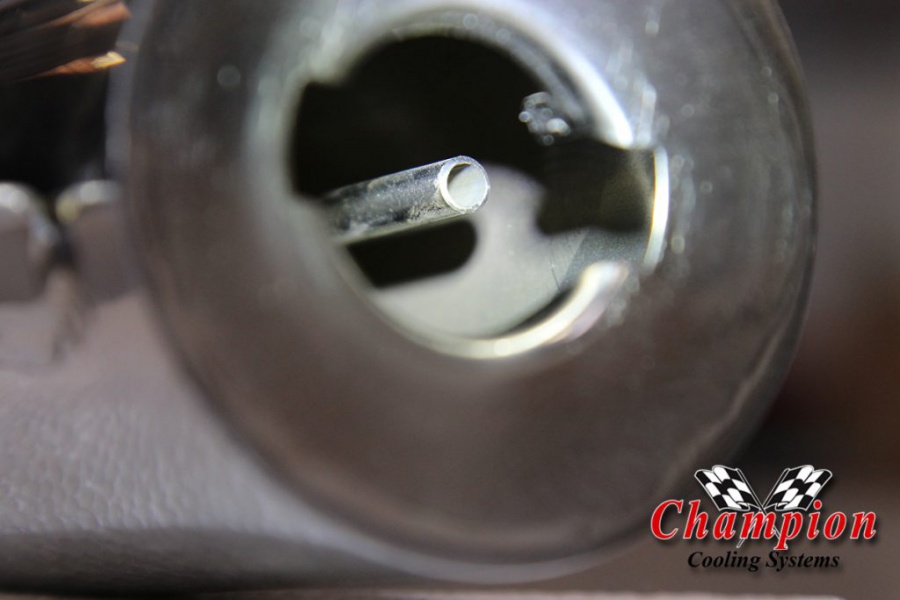 These tanks can be cylindrical, with both hoses attached at the bottom, like ours, or the factory style will enter at the bottom and the vent will be at the top. With our overflow tank, the two tubes are different lengths, with the vent being much longer, allowing the level to increase before it vents off excess coolant.

“A system with an overflow will have a vented radiator cap, and usually a sealed reservoir cap. The reservoir is never under steam pressure, which allows the coolant to return via atmospheric pressure,” continued Harding.

We then asked Michael what an Expansion Tank is, and how that differs from the Reservoir Tank. “Some manufacturers and websites will confuse the overflow reservoir for the expansion tank, but the two perform very different functions. Expansion tanks work in much the same manner as the overflow tank, but serve a very different purpose. Expansion tanks are just that: tanks that provide expansion of your cooling system, giving you up to a half gallon more coolant. You’ve seen these on some classic cars, like the Galaxie, or even the old Shelby Cobras,” explained Harding. 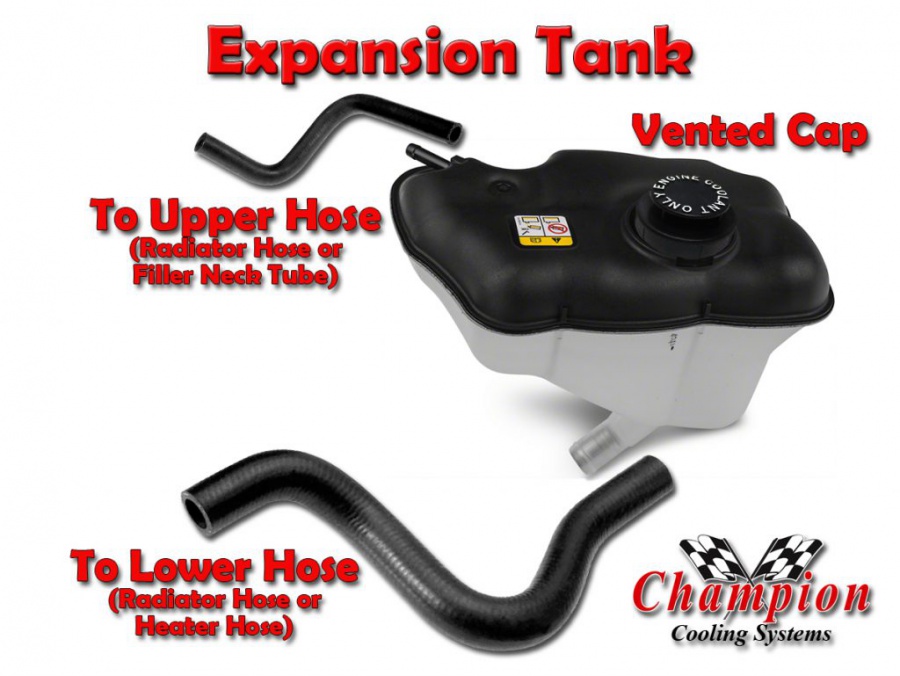 But where an expansion tank really differs is that it is typically a sealed system, not affected by atmospheric pressure. As temperatures and pressures increase, the expansion tank allows the cooling system to expand without bleeding any off to the atmosphere.  With this type of system, if the radiator has a cap it will be a non-vented cap; the expansion tank will have the vented cap in case the pressure exceeds the expansion tank’s capacity. In this case, a catch can or overflow can be used with the expansion tank to recapture expelled coolant. Once the system balances out, you should not have to add additional coolant.

Thanks to Michael Harding for his help clarifying and educating us. For more information contact Champion Cooling on their website or give them a call at (855) 40-CHAMP